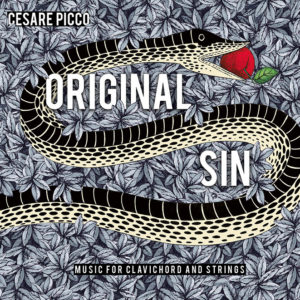 “Original Sin” offers the listener the surprise of a new sound, a real rediscovery of one of the most ancestral and natural sounds the Western history of music bequeathed us: the clavichord.

In Cesare Picco’s hands this instrument, unknown to the public as very little played in the same Baroque era, abandons every kind of stereotype and musical commonplace to embark on a path which tears down all the stylistic barriers, taking us to unexplored sound territories.

The codes of baroque music naturally match with the ones of contemporary music: cinematic, electronic and experimental.

Cesare Picco described his album this way:
“I think that the sound of clavichord is one of the greatest treasures musicians have. With “Original Sin” I want to break the original sin and go against the rules imposed by the executive practice and the fundamentalisms of music, inventing new sounds connections with one purpose: taking the sound of clavichord to unexplored territories”

His album includes 8 tracks, 4 of which for clavichord and strings, two improvisations for clavichords and Wurlitzer piano, one track for strings and electronic and one for clavichord, bass and two violins.