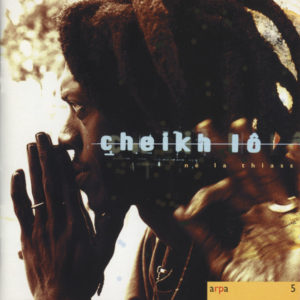 In 1994, Cheikh Le approached Youssou N’Dour with a demo tape of compositions which he had carried around in his bag for two years. When it came to the recording sessions at the Xippi studio in Dakar, the original ideas were so distilled and powerful and the musicians so flexible and experienced that six tracks were recorded and mixed in nine days. Released as a cassette on the Jololi label, “Né La Thiass” was hugely successful and confirmed Cheikh Lô’s place as one of Senegal leading songwriters and musicians. A further three tracks were specially recorded for this release.

Born of Senegalese parents, Cheikh Lô grew up in a mixed community in Bobo Diolasso, a small town in Upper Volta, now Burkino Faso. Here he describes his early passion for music: “I learned many languages and listened to all kinds of African music, especially the Zairean Bolero which had its roots in Cuban Son. Cuban music was all the rage in the fifties and when my older brothers started up their old 78rpm’s and danced with their girlfriends to El Pancho Bravo, I could mime the Spanish lyrics exactly but I never knew what they meant”. When he was a schoolboy in Senegal, Cheikh taught himself to play the guitar and drums and he finally abandoned his studies to join Ooze’s band in the 1970s. By the early ’80s he was entertaining tourists with cover versions of popular western hits at the poolside bar of the Savanna Hotel in Dakar. Invited to France, he spent two years as a session musician at the Bastille studios in Paris. “My programme was studio, sleep, studio. I spent the odd day with friends but I never really got to know Parts. When I returned to Senegal, I composed a song about the plight of our Senegalese brothers and sisters abroad”. Dokhandem” was an immediate hit and won Cheikh Lô the award for best new talent in 1990.

Cheikh Lô believes his 1991 cassette “Dieufdieul” was flawed by rigidly programmed rhythms. Being a drummer, he preferred the human pulse of a live beat and he was also determined to use more acoustic instruments. He decided to wait for the ideal producer and the best conditions in which to record his next album. “Between 1991 and 1994 1 made no recordings. Times were hard but the very last thing I wanted to do was to approach one of those ‘bana bana’ producers the Sandaga market who hire a studio, record your product, give you an upfront payment and that’s the last tim you’ll hear from them. When I gave Youssou the demo of ‘We La Thiass “he was immediately interested and said he would produce it”.

The songs on “Né La Thiass” are imbued with the spirit and teaching of the Mouride Islamic sect. Mouride means one who is reaching for Paradise and the Brotherhood was founded in the early years of this century by Cheikh Ahmadou Bamba who rekindled the Muslim religion just as it was being quashed by French colonisers. By his unshakeable faith and the miracle he allegedly performed, the visionary prophet gave Islam the fervant soul of Africa and validated the belief of black Africans who were so despised by their Arabising fairer skinned neighbours to the north of the continent. Ahmadou Bamba’s faithful companion, “Cheikh Ibra Fall” provided him with all his earthly needs and built the first settlements at Touba which now hosts an annual pilgrimage or Magal and boasts the largest mosque in West Africa.

During his lifetime, Cheikh Ibra Fall was given a special dispensation; he neither prayed five times a day nor did he fast; rather he and his followers worked to support those who prayed. To this day the Baye Fall are instantly recognisable by their ‘Djaxass’ patchwork clothing and rasta hairstyles. Cheikh Lô’s dreads and colourful costumes distinguish him as an artist with attitude and a Baye Fall. Every Sunday he travels to Ndiguel, a village twelve miles from Dakar where he takes tea and chats with his spiritual guide and marabout, Massamba. The centenarian is honoured with the praise song “Guis Guis”. A teacher with experience, he makes knowledge of God a pre-requisite for all other knowledge and believes that tolerance is the key to wisdom. As a mark of his attachment to the place and its people, Cheikh Lô has adopted the name Ndiguel as a pseudonym. The Mourides are renowned for their diligence and hard work and the Baye Fall are strong exponents of re-cycling. Their clothing and even household utensils are fashioned from the other people’s leftovers. The lyrics for the song “Cheikh Fall” suggest there would be no waste and less poverty if everyone wits as thrifty and resourceful as the Baye Fall leader. (‘Baye’ means ‘father’ in Wolof).

When these songs were being recorded there was a municipal strike in Dakar. Cheikh Lô was so insensed by the accumulating rubbish that he wrote “Set” to warn of the dangers to body and soul, cleanliness being next to Godliness. The word ‘Islam’ defines those who submit to the will of God. They should understand the notion of Destiny which can in an instant (“Né La Thiass”) change even the best laid plans. When Cheikh Ahmadou Bamba was sent into exile by the French colonisers in 1895, he was not allowed to pray on the boat which took him to Gabon. Legend has it that he laid his prayer mat on the sea; a scene that has often been depicted on Senegalese “Suwer” glass paintings.

In 1996, the first Jololi Revue featuring Youssou N’Dour, Cheikh Lô and Yande Codou Sene will tour in Europe, emulating the early Motown Revues as a showcase for new talent from Senegal. Despite his own demanding career, Youssou N’Dour is determined to produce and promote other Senegalese artists: “My own success will lie heavily upon me unless I do something for my fellow musicians and for my country There are so many people in Senegal who have very little to live on. Music brings revenue and we have some excellent musicians here. Cheikh Lô’s is a special talent. He is a great traveller and he’s very open and has assimilated many influences. Youssou’s own interventions on the songs “Set” and “Guis Guis” are those of a musicianly companion conspiring to create music that is warm, Lôcal, not to say passionate and entirely pleasing.