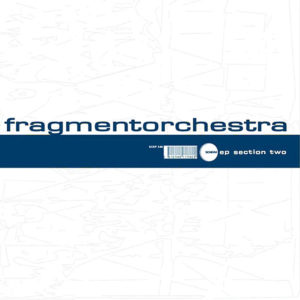 “Carioca”, the first EP published by Fragment Orchestra, caused the unanimous consensus from AR men and producers such as Gilles Peterson, LTJ Bukem, Basement Jaxx and Amalgamation of Soundz, who all often have words of praise for the 12”. By now “Carioca” has permanently entered into many DJ’s playlist.

“EP Section Two” is an extract from the project that will come to light in the new year. Recorded entirely in the Nu-Sound lab in Reggio Emilia, owned by Fragmentorchestra themselves, it’s a sound with fading borders, free of stylistic ties and bonds, which shows all the respect for jazz from the duo made up of Luca Pernici and Giulio Vetrone.

After “Carioca”, which was made for the dance floor, Fragmentorchestra proposes a first-rate warm up: the nocturnal “Sambita”, a track that manages to skilfully blend Brazilian rhythms with Mediterranean atmospheres. The extreme care for the sounds and recording techniques through which “Sambita” develops, project the track towards the philosophy of the typical ‘post jazz’ sound which ECM knew how to express in the ‘70s.

“Back Shop” opens up side B and really seems to be in the back of a carioca shop watching children play in the street.

Last but not least “De Muse” is a track of cool, intimist, and spiritual inspiration.

Here the perfect fusion of sound between the rhodes and baritone sax, gets transported from a broken, acidic, and yet elegant groove towards a ‘unique’ atmosphere, suggesting a sort of ‘constituent philosophy’ with no time, place, or obliged means: music that is free, music that is jazz.

all tracks written by Luca Pernici and Giulio Cesare Vetrone
conceived, produced and mixed at Nu-Sound Musiclab by Fragmentorchestra