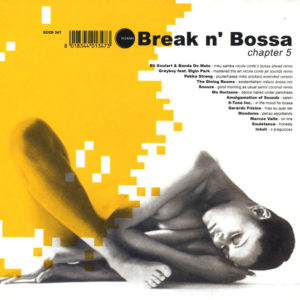 
After four extremely successful chapters the Break n’ Bossa series is back with a fifth and double one, collecting the most interesting and groovy tunes around our office now. This time we’ve decided to include a valuable bonus CD, that will introduce you to the wonderful and always evolving world of Break n’ Bossa, in the form of a completely live mixed “DJ Set”, taking care of playing well tested tunes and brand new ones still to be tested!

Part 1
This is the official compilation, please see the track listing.

Part 2
You will find 2 exclusive alternative rough mixes introducing the new Schema artist Rosalia De Souza (well known for her collaboration in the album by Quintetto X – Schema Records RTCD402) who will shortly release a new album called “Garota Moderna” (SCCD/2LP 333).
You’ll find an unreleased and awesome “instrumental piano perspective” version of “Mas Eu Quer Ser” by Gerardo Frisina and a new forthcoming single by Combo Granata “Colpo Su Colpo” (SCEP345). A new track by Nicola Conte called “Moroccan Variation”, which is not included in the Jet Sounds album leads into the new track by Les Hommes taken from their new 10” and forthcoming album.
Two other tracks well arranged and remixed by Nicola Conte are “Mastered The Art” by Greyboy and a “Meu Samba” by Eli Goulart e Banda Do Mato. “La Boca Del Rio” is the first single taken from the forthcoming album “Sobrenatural” by S-Tone that then flows into the unreleased track by Soulstance “Nucleus”, while “Aftermath of Love” & “Circle” by Soulstance are tracks from their two albums “Act On” & “En Route”. “Circle” here opens the door to the track by Intuit “O Preguicoso” drawn from the fantastic Compost Catalogue.
Enjoy it!!!