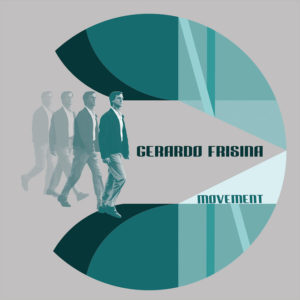 Gerardo Frisina has established himself throughout the years as one of the finest interpreters of the Latin-influenced Jazz club sound. Four years after the release of “Join the Dance”, he returns on Schema with a brand new album, “Movement”.
Gerardo’s contribution to the history of Italian Jazz is remarkable: along with his activity as a producer, his work has been pivotal in uncovering rare Italian and European Jazz for international audiences, thus reviving this rich heritage.
The studio is where he feels at home: his recent activity has been considerable, with a multitude of projects and single releases, and finally, a new album. Like a gifted movie director, he conducts with delicacy and mastery a fine ensemble of musicians, bringing into these recordings the outcome of lifelong research into sound. His fifth full-length album summarizes his experiences, his endless listening sessions and experiments with different music cultures.

Here are 12 pieces describing another amazing journey through Gerardo’s rich and exotic influences: these are the adventures of a European Jazz man immersed in Afro-Cuban inspirations. Gerardo’s love for Cuban music is well-known. Jazz had been influenced by Cuban music since its early days and Gerardo’s blend of this tradition has become a trademark. His fans will not be disappointed by “Movement” and the uninitiated will discover the manifold nuances of his sound.

“Movement” though, contains a new musical perspective – a more Afro-Funk approach that we can feel on tracks like “The Talisman” or “Mystic Latin”, with hot drum breaks that will set fire to the dance floor. This could be how would Manu Dibango or Fela Kuti sound in 2014!

“What is Jazz?” is how fine Jazz house music should be: a classy dance piece with a charming vibraphone, beautiful flute improvisations over strong acoustic percussion.

“Eastern Vibration – Shout it Out” is a unique homage and tribute to the spiritual Jazz of the late 60s and early 70s. The only track featuring vocals, is a medley of a theme by the saxophonist Charles Williams and an original composition.

Gerardo’s music has the indisputable power of creating cinematic atmospheres – a not-so unconscious inspiration, since his love for rare and exotic soundtrack is well-known. Take for instance “Reporter”, which resounds indeed with notes of an old TV opening theme on investigative reports, bringing to mind frenetic action.
And action is what “Movement” commands to the mind: a sound that finds its natural environment in small and warm clubs – intimate places where dancers release their energy and celebrate life.
“Movement” is a soundtrack of warm and summary vibes that will stay with us for a long time.

LP :
A1 Arrival
A2 I Need Rhythm
A3 Movement
B1 The Talisman
B2 Selvatico
B3 The Sound Image
C1 Eastern Vibrations/Shout it Out
C2 Reporter
C3 Communications
D1 Moving Shadows
D2 Mystic Latin
D3 What’s Jazz?