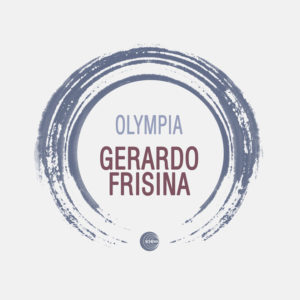 One year after the release of his fifth studio album “Movement”, Gerardo Frisina comes back with a new EP: 5 tracks that outline his current sound. Call it latin jazz dance if you will, but these tracks display subtleties, indications of different moods and areas of research.

The title track for instance, “Olympia”, delves into Gerardo’s passion for Brazilian music: a slow joint (only 115bpm!) where the berimbau plays an important role. Or “Talking Sticks”, a track that in some way follows the afrofunk mood already explored in his latest album. Gerardo eschews ordinary choices and opted for inserting often overlooked or out of fashion instruments in his tracks: the Hammond organ, the baritone sax, for instance. “East Breeze” reminds one of the latest Gerardo’s EP (do you remember Orient, co-produced with DJ Skizo?) and brings an exotic flavour to Gerardo’s trademark sound. There’s also a cover, an homage to one of Gerardo’s favourite tracks, Dizzy Gillespie’s “Tin Tin Deo”: a jazz classic influenced by afrocuban music of which Gerardo desired for long time to give his interpretation. The closing track is “The Obsession” – a track led by a repetitive bass, a pure example of Gerardo’s sound: a track that may sound house at first, but that the experienced listener will recognise as a far more complex blend of styles and influences.

The consistency of the sound of this EP is guaranteed by the presence of Gerardo’s musicians, the ones that participated on his latest full length.