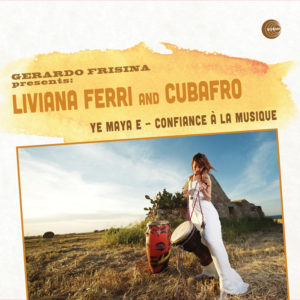 Schema is proud to release a new project curated by Gerardo Frisina.

This time Gerardo took a seat into the control room and produced a record that tells a story, a one about an encounter between like-minded artists: Liviana Ferri is an Italian percussionist hailing from Bari, who studied and had been heavily influenced by afrocuban music. Gerardo met her in Puglia at one of her gigs. This encounter fostered a series of gigs where Liviana played percussion on Gerardo’s DJ set… It took really little time for Liviana to come to Gerardo with some recordings of her and the Cubafro ensemble.

Starting from her vocals and percussions Gerardo arranged and produced “Ye Maya E”, a 3-track EP that perfectly transmits the powerful vibration of afrocuban music. A solid horn section, enthralling percussion sounds and a clubby attitude: these are sounds that will shake your body, the club sounds Gerardo got us used to.