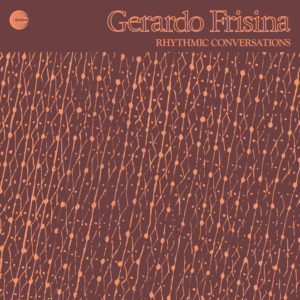 With “Rhythmic Conversations” Frisina shifts the geographic and stylistic coordinates of his music from his typical Latin-jazz contaminated with electronic music to a more ‘raw’ soundscape, in which the rhythmic element stands in the foreground.

The imaginary journey described by these ‘rhythmic conversations’ starts from Cuba (“Camagüey”), then heads to South America (“Arawak”, “Yapatera”) and reaches Africa after crossing the Atlantic Ocean (“Katanga”, “Yeha”). Not just dancefloor material then, but music with strong percussive and tribal elements. Music is first and foremost a form of language, perhaps the only truly effective one that allows people who speak different idioms to communicate with each other. This is precisely what Gerardo Frisina’s “Rhythmic Conversations” are about.

Closing the record we have an alternative version of “Camagüey”, a very different mix from the original one, in a particular Afro-Cuban music style called “Tumbao”.