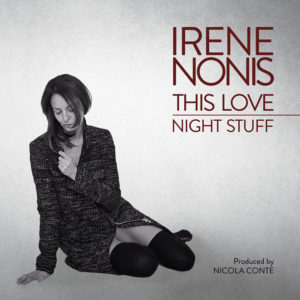 Irene Nonis was born in Cagliari, Italy in 1975. She started playing guitar at the age of 13 years and starts composing his first songs at 17. She first became interested in English music, then in American soul with variations towards jazz and bossa. Her references have always been Sade, Paul Weller, Astrud Gilberto and Johnny Marr. After living in London in 2000 she moved to Milan where she recorded her first album “TalkAbout” for Universal in 2003.

Irene has a delicate voice, appreciated by advertisers: his music has been chosen by D&G (2003) and Danone (2004) for their TV advertisements. She took parts of several TV show such as Festivalbar in 2003 and in Italy started performing in trio everywhere.

It’s now time to turn the page and go ahead making new experiences: two new tracks are now coming out on Schema Records produced by Nicola Conte with the participation of Gianluca Petrella, Massimo Martellotta, (Calibro 35), Seby Burgio, Carolina Bubbico and many other friends.

“This Love” as a blue-eyed soul track that sounds like between Northen Soul and Motown.

A1 This Love
B1 Night Stuff

Recorded in Lecce at Sudestudio by Filippo Bubbico and in Milan at Blue Spirit Studio
Produced by Nicola Conte for Schema Records
Mixed by Tommy Cavalieri at Sorriso Studio, Bari