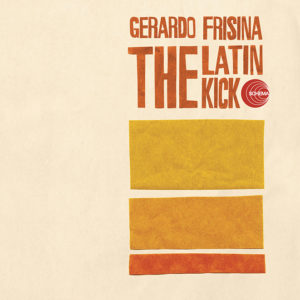 Frisina comes back on the scene with his third album “The Latin Kick”, after the previous two, internationally acclaimed works, “Ad lib” and “Hi Note”.

“The Latin Kick” is born from a concept of continuity with the singles “Descarga” and “Cubana”, respectively found on “Ad lib” the first and on “Hi Note” the latter. An album conceived for the Club environment. Club is meant as in a place where people get together to share music, manifesting through dance the sensations caused by it. Keeping in mind that Jazz has been for many years “The” music for dancing, the new album by Frisina fits perfectly the perspective of bringing back Jazz music on dance-floors. More than a tendency, it’s an objective that is shared worldwide from some time. Gerardo Frisina precisely chose Latin Jazz colours and shades for the production of this album. The ‘kick’ coming out of it is a pure injection of energy; a blast of intense excitement over the notes of exotic sounds and rhythms. This feeling is immediate from listening to the album. However Jazz stays firmly at the foundation of this album’s concept, resulting expressed as the essential surrounding substance from the performance of the musicians. The outcome is an enjoyable recording, adequately meditative to be listened in the comfort of a home.

Of the 12 tracks in the album, only 3 are covers; researched with accuracy and reworked with quality. “The Gods Of The Yoruba” is the single released before the album, and the original composition is by Horace Silver. In this gripping piece reworked in a Club key by Frisina, it feels like the Orishas (the deities who are considered messengers of God by the Yoruba people in Nigeria, and whom were taken during the African diaspora to Cuba and the West Indies) want to grab evryone to the dance.

Another remarkable cover is “The 7th Day”. Originally composed by Freddie Hubbard, in this version the sax and trumpet’s dialogue elevates the theme, which is always supported by an incessant rhythm lead by the piano. The third cover is a Brazilian Samba/Bossa track, composed in the ’60s and revisited on this occasion with ‘contemporary clubs’ sound effects.

In “Gosto Do Que E’ Bom” the initial feeling remains intact though, courtesy of brilliant singing that narrates of spectacular football actions of Pelè: themes that are frequent as well as important back in those days of the great Brazilian Seleçao.

Another spotless Samba composition is “Batucafro”. A Batucada with light Afro hints, perceptible from the flute. The true delight of this track is a Bossa styled guitar that propels it on the wings of music specifically designed to dance.

“Cortante” and “Senior Rico” recall the typical Gerardo Frisina’s Latin Jazz releases. In this compositions though the element of Jazz contamination is more strongly marked, as displayed by the explosive horn section in “Cortante”. This track introduces a new musician of the ensemble, the Cuban trumpeter Hendrixon Mena. Surprisingly enough in this track, he gives his best on piano. In typical Salsa style, dragging the whole band to a relentless performance.

“Senori Rico” is an uncompromisingly modern track both in the production as well as in the rendition. The percussive element reigns unmatched. A colourful, unpredictable tune that stays loyal to tradition though by the way the instruments play and sound.

“Cohete” instead, is transparently an Afrocaribbean piece. It makes the B side of the afore mentioned single, “The Gods Of The Yoruba”. Its got an hypnotic flute as well as rhythm patterns resembling Puertorican Bomba or Plena.

Along this pathway “African Seeds” and “Latin Seeds” follow. Ingenious productions by Frisina inspired from the music of Sahib Shihab. These two tracks formed sides A and B of another single previously released.

“Hush” hooks the ears through a piano sounding vaguely oblique yet unmistakably Jazz-Salsa. The same Cuban trumpeter Hendrixon Mena is playing comes into the equation playing it again, this time in an inspired combination with Luigi Bonafede, already pianist for Frisina from time. This piece of music blends classic tradition with contemporary effects in a way that’s really spot on.

“Jazz Ally” even though contaminated by Latin sounds, expresses a certain Jazz gusto. This is perceptible form piano harmonies as well as from hints of vibraphone and sax and trumpet solos.

“Bite the Nite” is perhaps the most cinematic composition. Sounds perfect as score theme in a spy or police movie of the ’70s, courtesy also to a wicked vibraphone solo. Whereas a feeling of Boogaloo diffused by the rhythms and the horn sketches. This new work by Gerardo Frisina shows a very balanced, stunning amalgamation of rhythm devoted to dance with great taste for music.