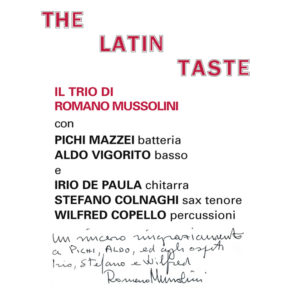 Although he was one of Italy’s leading jazz musicians, playing the piano at an international level in a mainstream style, it is probable that Romano Mussolini owed some of his fame to also being the third son of the Fascist dictator Benito Mussolini. A common idea that everyone had before listening to his music, and discovering the importance he always gave to every musician who had the opportunity to play and grow artistically beside him.

Born in Forlì Romano Mussolini enjoyed a privileged childhood, studying music playing classical pieces with his father on the violin. After the death of his father and the his own exile together with his family to the island of Ischia he learned to play piano and accordion. He first heard jazz music through some albums that his older brothers had bought, and he grew to love the American art form. In 1943 he began experimenting with playing jazz on the piano, and was a largely self-taught musician. After World War II, he started playing jazz under an assumed name and by the mid 1950s, he had formed a trio. The Romano Mussolini released a self-titled record through RCA Records in 1956. In 1956 Mussolini’s trio recorded his self-titled debut for RCA. Trumpeter Franco Ambrosetti was an early partner. In 1963 the Romano Mussolini All-Stars recorded Jazz Allo Studio 7 (Ricordi), which earned widespread acclaim. This time he did not hesitate to accept the offers of tour packages, and his name was spread further around Europe. The album was followed by Romano Mussolini All-Stars at the Santa Tecla (Philips) later that year. In 1963, leading this band Mussolini won the Italian critics’ album of the year prize for “Jazz at Studio 7”. At the same time, his style began to move from the cool West Coast modern jazz favoured by Gullin and Baker to more romantic fare, and by the following decade he was recording moody albums such as “Mirage” and “Soft and Swing”, leavened by his occasional high-octane jam sessions with the expatriate US clarinettist Tony Scott, who had settled in Rome.

The “Latin Taste” LP is a rare bossa nova which energizes the overall feeling of the music, while taking it to another dimension. The grooves and vibes are just enough to keep the listener motivated at the work place, while also adding the feeling that one should be “chillin” in the warmth of the sun, with a refreshing cold drink in hand, lounging by the pool, or better still, on the beach of a tropical island.

This record was composed in collaboration with the valued Brazilian jazz guitarist Irio de Paula, the Italian saxophonist Stefano Colnaghi and the African percussionist Wilfred Copello.
The majority are covers of well know works from artists such as Jobim, Ellington, Parker.

LP:
A1 Meditation
A2 Besame Mucho
A3 Perdido
A4 Versiliana Samba
B1 Thomas Blues
B2 These Foolish Things
B3 Drop Me Of Harlem
B4 Confirmation