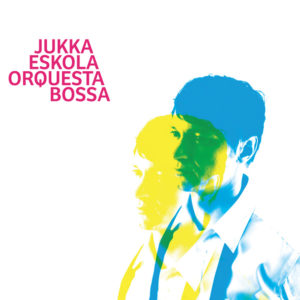 “The “Orquesta Bossa” project started actually with a live gig in January 2012 when I had a chance to produce a concert for a line up with a quintet plus a string quartet. The material was jazz and bossa standards, nothing unusual. The sound of the combo got stuck in my mind, I just loved the traditional bossa sound of the rhythm section, combined with the front line horns and the string quartet adding a little bit more modern angle to it. So I decided to make more of the project and compose some original tunes and make an album. I was lucky to get my good friend, drummer Teppo Mäkynen involved in the project as a co-writer and producer. He has such wide knowledge in all kinds of music, and being a bossa nova enthusiastic, he was the one and only guy I could think of for this project. So we made tunes that we thought would be, in a way traditional Bossa nova, but at the same time having some Scandinavian angle to it.
We were not trying to sound like authentic brazilians, but just making music that we think sounds great by using the traditional bossa nova sound as our guideline. The atmosphere is actually quite modal.
I also asked a very talented arranger, Jussi Lampela, to help with the string arrangements which really play a big part on the album and the live band.
The musicians on the album are the cream of Finnish jazz players, and classical players when it comes to the strings. The recording sessions were made in a very traditional way, all 9 musicians playing 100% live takes in the same small space. We used old 50’s and 60’s tube microphones and recorded on an analog 8-track tape recorder.

The tracks on the album:
“Bolly Beat” is a great opening for the album. A very positive and light tune that just grooves from the beginning to the end. Also the first tune we recorded in the sessions.

“And the Days Passed By” is one of my favourite tunes on the album. It has a beautiful melody and there is a certain fragileness involved.

“Tensions” is one of the more darker tunes on the album. But still releasing the suspense when going to the bridge.

“Chester-le-Street” is a bit funky Bossa tune beginning with a beautiful string introduction that goes to a “partido alto”- groove inspired by the drummer Jaska Lukkarinen. And ending to a nice 7/4-vamp with a flute solo.

“Martha’s moment” is a nice bluesy bossa that kind of defines the lightness of the album for me. The title is inspired by my youngest daughter Martta and her funny ways.

“From the Hot Afternoon” is a cover song composed by Milton Nascimento for the great sax player Paul Desmond. I have always loved Desmond’s album named after this track from the late 1960’s. That album has in a way been an inspiration for me with the sound of “Orquesta Bossa” and also my previous album “Walkover”.

“Wien” is originally a song by the Finnish singer Ville Leinonen. I have always loved the song and when the original version was released some 10 years ago, I knew that I wanted to make a version of it some day. There is something magical in this version beautifully sung by Chihiro.

“Siam Square” is a song with a little oriental twist again moving back to a nice bossa flow on the bridge.

“Ricky-Tick” is a fast samba starting with trumpet and drums only and then going to a very melodic theme. The title of the song comes from Ricky-Tick Records which had a great impact on mine and many of my fellow musician’s career.

I could not consider myself an expert of bossa nova music but as many jazz musicians, I have played a lot of the bossa standards during my career. With this new album I feel that in a way I have found a new approach to the music. What I love in bossa nova is the lightness and positive feeling. For a jazz musician it is also in a way a challenging environment to improvise as you can not rely on the rhythm section reacting as much as in a small jazz band environment. The soloist must carry the solo all by himself in a more melodic approach, in a way just floating on the surface of the music rather than diving deep like in creative jazz music normally.
This album is not about presenting Jukka Eskola as a virtuoso trumpet soloist but it’s more an album about good music, melodies and atmosphere.”

LP:
A1 Bolly Beat
A2 And The Days Passed By
A3 Siam Square
A4 Chester-Le-Street
B1 Martha's Moment
B2 From The Hot Afternoon
B3 Wien
B4 Tensions
B5 Ricky-Tick