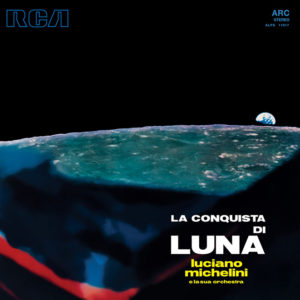 
There is only a tiny Wikipedia page about Luciano Michelini, and is written in German. A fact that should make us think on how he is still virtually unknown and unappreciated in Italy. After graduating from the conservatory, the pianist and composer started working as a teacher, while pursuing a more creative ca-reer as a composer. From 1964 to 1982 he also worked as a manager for RCA and left his mark primarily as the author of Italian film soundtracks. Among his best-known scores are worth mentioning “Il Decamerone nero”, “La polizia accusa: il servizio segreto uccide”, “La città gioca d’azzardo” and, above all, the beautiful “L’isola degli uomini pesce”, written for the eponymous sci-fi horror film by Sergio Martino.

His true masterpiece, however, was composed in 1969 and is titled “La Conquista di Luna” (The Moon’s Conquest), one of the rarest and most sought Italian soundtracks, virtually impossible to get without spending a fortune. Michelini and his orchestra produced this imaginary sci-fi soundtrack enriched by the presence of the legendary singer Edda Dell’Orso on some tracks.

Drawing its structure from classical and orchestral soundtracks, the album is tinged with prog elements ahead of their time, soft psychedelia and moments of sheer genius: more than 40 years after its first release, it still guarantees a jaw-dropping listening experience. It is almost impossible, for example, to listen to “Tycho” without thinking of the following decades of orchestral pop production and how a song like that could and should have exerted its influence. Better late than never…