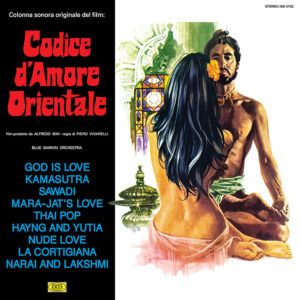 Definitely not an art-house film, and surely director Piero Vivarelli will be remembered for other works, for instance the cult movie “Il Dio Serpente” featuring Nadia Cassini (1970) and “Il Decamerone Nero”; or for his activity as a songwriter: in fact he signed classic Italian pop tunes such as “24.000 baci” and “Il tuo bacio è come un rock”, sung by the pop star Adriano Celentano. Nonetheless, the movie featured a great soundtrack, as most of them were in those years – we’re talking about 1974 here -, written by Alberto Baldan Bembo (here under the moniker of Blue Marvin), an excellent composer and pianist, older brother of the way more famous songwriter Dario.

Consisting of nine tracks, the soundtrack spans several genres and lingers between Italian popular music and orchestral pop, Asian influences (couldn’t have been different), breakbeat, funk and some experimentalisms. The highlights of the album are “Narai and Lakshmi”, the splendid “Sawadi”, “Nude Love” and of course the most famous track of the score, “Kamasutra” – a funk and wild piece that had been sampled by Stereo MC’s in 2001 for their hit “Running”. Not to be missed from any self-respecting DJ’s selection!

LP:
A1 God Is Love
A2 Kamasutra
A3 Mara-Jat’s Love
A4 Sawadi
A5 Nude Love
B1 Hayng and Yutia
B2 La Cortigiana
B3 Thai Pop
B4 Narai and Lakshmi