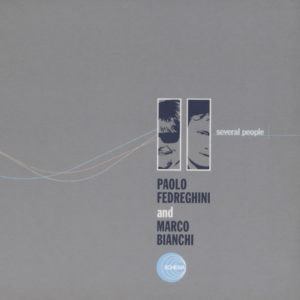 Paolo Fedreghini is a sincere and passionate music connoisseur, a musician who can also play the role of the producer, with a keen attitude to the research of various sounds, with a preference for electronic music. He meets Marco Bianchi, pianist, composer and friend with a log of six albums of contaminated music, mainly jazz, and various co-operations with Italian musicians and artists of world renown.

Together the give birth to projects as musicians, composers and producers.

Their arrival at Schema Records is on the occasion of the release of the album “Officine” in the name of Paul & Mark for the label Milano 2000, a debut album that marked the start of their by now consolidated cooperation.

Paolo and Marco created a small structure that today is the confirmation of how important it is to have a base, a place where their musician friends can meet to trade cultural experiences and professionally grow, a small recording studio, well equipped even for live takes, that was the stage of all the co-operations of this album, so that Paolo and Marco decided to call it “Several People”.

One of the most relevant contributions to the album was offered by Ermanno Principe, a real talent, a versatile musician who sings on this album. He’s a drummer. He worked with many important musicians on the Italian and international jazz scene, such as Dado Moroni, Barry Harris and more recently Steve Grossman. The other male voice is Daniel Richards’. Claudia Bernath and Angela Baggi, the woman vocalists of this project, often worked with Marco and Paolo in live and studio projects, just like Maxx Furian, one of the most appreciated Italian drummers, Marco Ricci, elegant double bass player, Angelo Pusceddu, volcanic percussionist, and Giacomo Tringali, J. J. Sansone, Mimmo Valente and Renato Daiello in the brass section.

“Several People” hides a strong dualism: it’s easy to notice that to songs like “You Are A Star”, “Another Face”, “Oriental Smile”, “Stay” and “Nothing Has To Change” are opposed to instrumental compositions or numbers sung with a more marked rhythm, such as the single that was released about a year ago, “Please Don’t leave”, and the two new singles “Spread Your Love”/“Blue Night In Africa” and “Circus In C Minor”/“Urban Savage”.

Another production where Schema Records presents a product that goes beyond trends and fashions, where the only common denominator is “Music”!

LP:
A1 Spread Your Love
A2 Blue Night In Africa
B1 Another Face
B2 Urban Savage
B3 Onda Espumante
C1 Stay
C2 Oriental Smile
C3 Nothing Has To Change
D1 You Are A Star
D2 Circus In C Minor
D3 Theme Of Solitary Notes