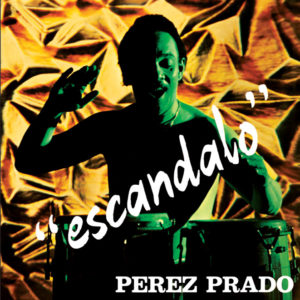 
Escandalo!, as Perez Prado states in the brief sleeve note, is named after a “new rhythm” created by himself. “A rhythm you can dance to in freedom, without specific steps”. In spite of this naive launching, the opening track Chicago Banana is a declaration of intent, with its Sly Stone-esque groove. 9 out of 12 tracks are originals credited to composers of the Unifunk circle, but the track list is careful to preserve Prado’s well-established Latin appeal, by including three standards such as Brazil, El Manisero and Tequila.

A hispanic-looking thin moustache, two hands drumming hot Latin rhythm on congas, bongos and tumbas, and a well-known stage name: Perez Prado. Were we in the presence of the ‘King of Mambo’? The man who got the whole world dancing to hits such as Mambo n°5 and Cherry Pink and Apple Blossom White? Well, as we’ll see, there was a certain controversy behind this identification.

The King of Mambo‘s first name was not “Perez” and his family name was not “Prado”. This little known fact would help in explaining this situation. Actually, the great musician from Cuba, born in 1916, was christened Damaso. Perez-Prado was his double-barreled surname. Damaso Perez-Prado also had a younger brother named Pantaleón, who was born in 1928.

Pantaleón Perez-Prado was the owner of the moustache and hands we had been talking about earlier. Yes, Pantaleón was a musician too, a good percussionist, bass player and arranger. However, since he grew up in his brother’s shadow, he tried to make the best of it. Pantaleón began travelling around the world to play on stage as Perez Prado. People were not aware of this name/surname issue, and simply said: “Oh, sure, it’s Perez Prado, the King of Mambo”.

It would have been pointless to accuse him of being an impostor as he would have only shown his ID and said: “It’s not my fault, señor, if I have the same surname as my hermano”. This is also the reason Pantaleón gave a French judge in the early sixties, when he was sued for impersonation. Sources are divergent about the result of the suit, but the fact remains that it was due to this controversial stage name that he was able to carry out a career as a musician and bandleader in Europe for two decades. This is where we meet the most interesting side of Pantaleón Perez Prado.

After wandering around between Germany and Italy, in 1972 our hero settled in Milan. This happened when Ariola, the German label that had signed the musician, sealed a distribution deal with the newborn Italian label Unifunk. Pantaleón Perez Prado was chosen as the star of the roster, so the label surrounded him with a big band that involved some of the most promising musicians from the Milanese jazz scene. Amongst them was drummer Tullio De Piscopo (a popstar-to-be), bassist Pino Presti (who was a session man and arranger for Italian superstar Mina throughout the Seventies) and pianist/organist Mario Rusca (a Unifunk habitué). The resulting LPs ‘Escandalo!’ and ‘Perez Prado – Don Alfio’ were released in 1972 and 1973 respectively and are still considered to be two incredible musical gems. After the sunset of “mambo fever”, Pantaleón was able to reveal a funky attitude that comes out in these amazing recordings.

Pantaleón died on Saturday December 3rd, 1983, at the age of 57 following a short illness. The obits that were published in Italian newspapers described the life and career of the older Perez Prado, Damaso, who was alive and kicking at that time. It took at least two days before journalists discovered the clash of identities between the two Perez Prados.

LP:
A1 Chicago Banana
A2 Brazil
A3 Tommy
A4 El Campesino
A5 Il Venditore di Nocciole
A6 Escandalo n.1
B1 Escandalo n.2
B2 Congrejo
B3 Que Es Lo Que Pasa?
B4 Smack!
B5 Nadie
B6 Tequila