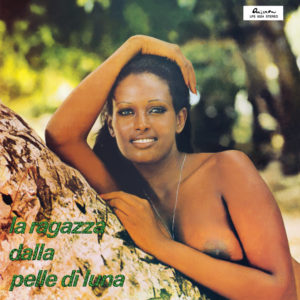 
“La ragazza dalla pelle di luna” is the first chapter of Piero Scattini’s acclaimed movie trilogy, completed by “La ragazza fuoristrada” (1973) and “Il corpo” (1974), whose soundtracks were all entrusted into Piero Umiliani’s expert hands. With a title taking inspiration from the fame of Seychelles’ indigenous beauties (a myth later dismissed by Scattini himself) the film found its protagonist thanks to a casual encounter between the director and the beautiful model Zeudi Araya, the first element of a cast that featured names like Beba Loncar, Ugo Pagliai and Giacomo Rossi-Stuart. Araya’s beauty inspired a plot based on love and betrayal under the sun of the beautiful islands of the Indian ocean.

The film was a great hit, together with its soundtrack, composed by Scattini’s great friend Umiliani, here working for the first time at the famous Sound Workshop recording studio in Rome. Piero Scattini remembers this collaboration with these words: “Very often we went with Zeudi to visit him in his studio as he was writing the music for the film. The best moments were when we were listening to him playing the piano. And, in fact, the film’s main theme (“Pelle di Luna”) is a solo piano piece that enhances even more the exotic atmosphere and the emotional impact of the story”.

Especially the sumptuous orchestrations, the guests and the prestigious friends who took part in the recordings, made this soundtrack one of the Maestro’s most famous. As always, at his side we find names like Alessandro Alessandroni, Edda Dell’Orso, Franco D’Andrea, Gianni Basso, Oscar Valdambrini and Angelo Baroncini, thus explaining the excellence of the final result: a total of fourteen tracks, lingering between orchestral and pop music. ‘Easy listening’, as they used to say, but of extraordinary quality.