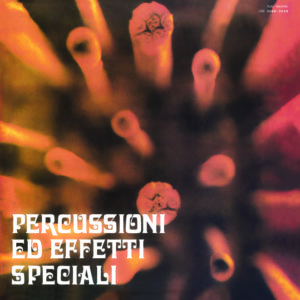 
The long and prolific career of Piero Umiliani, also consisting of dozens of collaborations for television and cinema, has given (and is still delivering, given the amount of material that is finally coming back to light) a long series of experimental albums and music libraries that showcase his songwriting skills, as well as a natural curiosity towards avant-garde and more ‘difficult’ sounds. We can attribute to the second category this “Percussioni ed effetti speciali”, a title that clarifies pretty much the release content (Percussion and special effects).

Recorded, as many other works of his, at the Sound Work Shop in Rome – a personal studio that was also available to many other musician colleagues – this double album evenly spreads its four sides over percussive experiments and other more abstract ones, with excellent results in both cases. The first disc recalls another little gem that’s just been reissued, Egisto Macchi’s “Africa Minima”, but offers a wider overview of the percussive spectrum, including beat and swing elements. Such tracks as “Problematica giovanile” (in two versions), “Protesta giovanile” and “Subacquea” conquer on the first listen, but it would be impossible to underestimate the other side of the coin.

The sixteen tracks from “Effetti speciali” are equally fascinating, though less immediate. Percussion accompany episodes as “Dinamica in tensione” and “Esplosioni e battimenti”, while synthesizers characterize “Fascia astrale”, “Segnali Morse” and “Stato ipnotico”. A perhaps less known Umiliani, but this is just one more reason for a deserved and fast rediscovery.

CD:
Same as the double LP on a 31-track single disc.