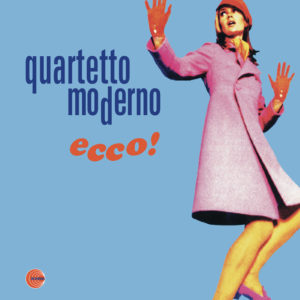 Quartetto Moderno is going through Italian jazz scene foregoing a new feeling which implies a cool aesthetic so much connected with European culture. Actually, we cannot but remark that Italian jazz music issued between the late ‘50s throughout the ‘60s is gaining attention elsewhere but in Italy. Numbers and numbers of excellent recordings – from Basso Valdambrini’s to Quartetto di Lucca’s, from Giorgio Azzolini’s to Eraldo Volontè’s – are now in great demand thanks to some characteristics which were probably not so easy to focus at the time: actually, they are the fruit of a musical research sustained by stylistic choices showing undoubtedly Italian roots; which is the right humus for Quartetto Moderno. Refined sounds, modal impulses combined with elaborate harmonic series and romantic melodies represent the natural, modern continuation of that artistic period and mood.

The young age of the musicians is then the curious pretext for unexpected executions showing however creativity and style in perfect balance. “Giovani d’Oggi” is a modal theme in 3/4 written by Giovanni Tommaso for saxophonist Lee Konitz and included in an album issued in 1968. Beginning with a double-bass ostinato, the tune is plunged in a dense night atmosphere, full of tensions increasing its pathos. The three soloists, Mirko Signorile, Gaetano Partipilo and Mauro Gargano, express complex ideas with great delicacy.

“Mr. Bond” originally issued in the early 60’s album “Something Blue”, it was written by the alto and flute player Paul Horn and recorded by his quintet becoming a fascinating model for Quartetto Moderno. This is a modal tune too, based on a series of minor thirds and played in tempo mosso. The soloists Pasquale Bardaro and Gaetano Partipilo enrich the tune structure with their free, modern playing. It was a great achievement for us to feature Nicola Stilo, one of the best flute players around.

“Love Theme from Spartacus” represents one of the highest artistic levels of the album thanks indeed to Stilo’s execution. This love theme, written by Alex North for the move “Spartacus”, became of “cult” among jazz players only with Yuseff Lateef’s and Bill Evans versions. In this one, the whole band seems to follow Nicola in a choral dance above and imperceptible horizon line.

“Theme from Ecco” is quoted from the homonymous movie. The sinuous melody, written in the 60’s by the Italian composer Ritz Ortolani, is played on bossa nova beat with an intro by Pasquale Bardaro whose vibraphone solo is full of intense lyricism.

“The Windmills of your Mind” movie theme from “The Thomas Crown Affair” (1968), was written by Michel Legrand, a jazz composer lent to more commercial music. The tune expresses a nearly classical mood plunged by Quartetto Moderno in a sinuous rumba beat. Three brief improvisations by Bardaro, Signorile and Gargano exalt the gloomy essentiality of the execution.

“Sconsolato” is one of the compositions selected on Schema Records/Rearward reissues, including some recordings by Kenny Clarke’s and Francy Boland’s small bands originally produced by Gigi Campi. Written by double-bass player Jimmy Woode, the tune is here played on Afro-Cuban beat with a long flute solo by Nicola Stilo (in the role formerly played by Sahib Shihab) showing clear bop influences.

“Moderns Dilemma” has been expressly written for this album by Mirko Signorile, a young piano player endowed with refined intuitions and brilliant technique. The tune begins with a 7/4 part changing then into a swinging 4/4. The modal atmosphere is crossed by a psychedelic tension. Mauro Gargano showing, demonstrated throughout the record a strong and clear style recalling Paul Chamber the author of “AstroGange”, a blues played in medium time, enriched by oblique solos.

“Il Gioco delle Parti” is an original composition by Pasquale Bardaro, a vibraphone player of promise, at his ease in any kind of beat and structure. Quartetto Moderno is augmented by Domenico Campanale, a drummer showing remarkable control, brilliant sound and impeccable swing all over the album.