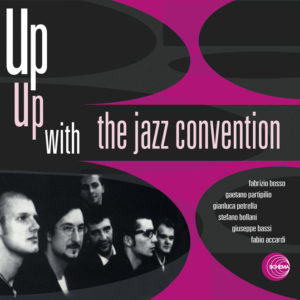 In my recent review of the Fez Combo, Paolo Achenza Trio and Intensive Jazz Sextet artistic production for Music Jazz I have already had the chance to praise their hard work of searching, experimenting and fusing together old and new musical as an alternative to the conventional tendencies. This project started in the “Baresi mines” a few years ago, thanks to Nicola Conte, the leading inspiration for an interesting group of young jazzmen I would call “scapigliati” (dissolute) according to theiR wish for what’s new. If the style fo the jazz schools has never been predominant in the above mentioned artistic production, here the very young artists of The Jazz Convention group intend to go through the still vital and persistent Hard Bop trend, particularly the Blue Note pattern of the sixties. Obviously it is mainly a way of getting back and interpreting in modern terms unexplored sounds and atmospheres, overflowing with vital sap, willing to relive through the sensitivity and taste of the modern artists.

It was a hard project which has been successfully realized with regard to the natural stylistic assonance the ties “Argento d’Africa” to “Unit 7” (the most evident example), and to the revision of Hill, Jones and Morgan themes which are strengthened. The melodic rhythmic sound is undoubtedly inspired by the tend of the sixties, yet it appears modern in its fresh telling touches. In fact the soloist have been able to plunge into a peculiar dimension without choking down their own personalities.

This is evident in each tune: “Argento d’Africa”, animated by an increasing rhythm, opens and closes with an effective riff in which Bollani, the piano player, seems to communicate with the wind instruments and perform delicious solos.

“Unit 7”, faithful to its origins, becomes cooler and cooler through the witty exchanges between the drummer and the soloists.

The same can be said about “Team Spirit” enhanced by enticing trumpet and double bass solos, and about “Mr. Kenyatta” whose vigour lies in the red-hot opening and closing of the wind instruments and in the increasing and obsessive rhythm.

The same obstructive rhythm found in the evocative “Saluti dalla Penisola”, enriched by the great participation of the famous trumpet player, Bosso. He is the main performer in “Modal Convention” in which he plays a convincing omage to Freddie Hubbard, the most outstanding exponent of the Hard Bop trend.

“Memory of a Dream” and particularly “That’s the way it is” are the best examples of the above mentioned project: here, old themes change their external shape preserving their essence.

Eventually in “Mira” and “Amanda” you can find an extremely amusing funky background that spports all those soloists excellent performances.