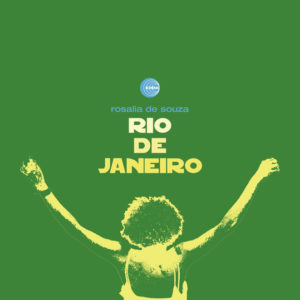 The carioca artist is back on the scene with two sunshiny singles and related fizzy remixes, all on one twelve inches! Um Novo Dia becomes a speedy club samba; whereas Rio De Janeiro still a samba but slower and slightly more “techy”; by the hands of Diesler and Beatfanatic respectively. Both songs are taken form the acclaimed last album of Rosalia “Brasil Precisa Balançar”, which was produced in Rio de Janeiro by the great bossa maestro Roberto Menescal, with Rosalia displaying her enchanting interpretation.

Originally this piece written by Schema’s very own Toco with S-Tone Inc. first featured on the album “Instalaçao do Samba” by Tomaz Di Cunto, a.k.a. Toco. The song reveres the city of Rio, the shore that every person worldwide inspired by Brazilian music dreams of. In this 3rd single from her album, the instrumental versions follow the remixes on both sides. As ever they are magically played by the same trio of piano, double bass and drums which features in the album. Diesler is the young yet affirmed producer from Tru-Thoughts who puts his touch over ‘Rio De Janeiro’ on Side A. Whereas the Latin-Swede going by the name of Beatfanatic treated the feel-good spirit of ‘Um Novo Dia’. This record contains the ingredients for a long-lasting summer delight: Brazilian tunes both for dance clubs as well as relaxed listening pleasures.

A2, B2 recorded in Rio De Janeiro, Brasil at Fibra Estudio