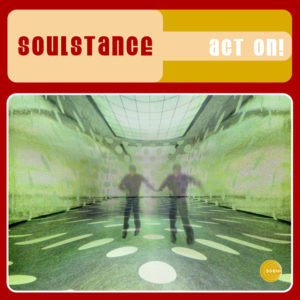 On the wake of the success of their first album, Soulstance here present their new release: “Act on!”. This time they are accompanied by other musicians, not present on the first album and, needless to say, they have now reached a certain maturity. It is here announced by this weaving of break n’ beat and vibrating harmonies.

Musically the record varies from laid-back jazz to loungy Latin atmospheres, melting arrangements of subtle harmonic changes. The arrangements are subtle and going from organs to strings, from flute to congas, guitar and various other percussion elements.

All tracks written by Vincenzo Lo Greco except 02 written by Lalo Schifrin
Published by Edizioni Ishtar except track 02 by Warner-Servant Publishing Corp.