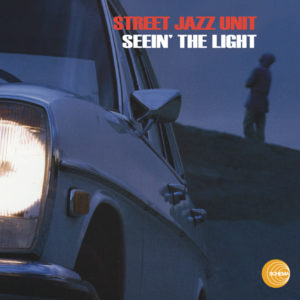 In the long history of jazz every new branch has always been skeptically welcomed by most musicians. The same is happening to the contemporary fusion of jazz and hip-hop, which nevertheless continues to embody one of freshest sources of inspiration for avant-garde jazz musician. It is the proof that modern music evolves faster than press’s ability to label it, thus exceeding easily definable limits.

Street Jazz Unit is one of the few examples, blending Blue Note with 50’s west cost, soul jazz, be-bop with hip-hop vibes. Once again jazz proves its far reaching roots in its modern branches, once again words are too conventional to describe a sound that can only be felt. Still when listening to this album it will be interesting to notice how natural the acoustic notes, the keys and the vibes blend in the framework of a startlingly new and yet firmly classic sound. Improvisation and freestyle is the common denominator between the jazz heritage and the modern hip-hop language.

As far the line up is concerned, what can we say about the musicians? Bruno Marini is a self-made straight baritone and flute player. His music doesn’t sound like any other’s. He could play uptempo, downbeat, low or high tonalities and still catch wreck, whether Blue Note or shuffle you name it. Reminiscent of the jazz influenced beat generation, M. Bassado is the beat poet, story teller ranging from his syncopated tongue twisted accents where an extra beat demands it, to a smooth harmony when the mood is a laid back.

All this in the framework of a versatile polyrhythmic section for this original sound: unstoppable time keepers, phat sounding groovers, clever in their simplicity, yet complex enough to provoke your curiosity, never playing a useless shot or key. Basically the job cats! This ambitious project was put together by Nicola Conte.

LP:
A1 What's the Best Thing to Do Tomorrow (Fez Version)
A2 Street Jazz Unit
B1 Soul Jazz Document Part 2
B2 Seein' the Light
B3 Foot Prints of a Formative Stage