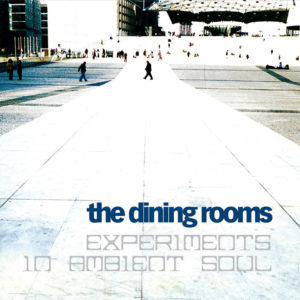 “Experiments In Ambient Soul” is the fourth studio album by The Dining Rooms and is released after the acclaimed “Tre” (2003) and “Versioni Particolari” (2004), collection of remixes (The Cinematic Orchestra and Nicola Conte among the others) and alternative versions. The Dining Rooms is born in 1998 as an instrumental project deriving from hip hop and evolves, album after album, deepening jazz and blues subjects, varying the speed of rhythm and most of all elaborating a vocal and songwriting concept in the most classical sense, that become the starting and finishing point of this record. Mainly the cooperation with Sean Martin, started in “Tre”, and the beginning of the live activity, that features Sean on vocals, generate in Stefano Ghittoni and Cesare Malfatti the desire to more deeply measure themselves with the song form.

“Experiments In Ambient Soul” has as always (and superstitiously) 13 tracks but this time the predominance is for the vocal ones, even if they are produced through dilated atmospheres and with the creation of deep and spiritual vision of the ballad. Almost a concept album, a travel through different vocal styles and instrumental settings(“Experiments in ambient soul”), folk and blues re-readings, funk accelerations(“Milano calibro 9”, inspired by novelist Giorgio Scerbanenco, and “Afrolicious”) and dub dilations (“Il girotondo dei grandi”), in the quest for ambient soul. While writing the record, Stefano and Cesare decide to go over the concept of DJ project and measure themselves with real instruments: therefore drums and percussions, double and electric basses, guitars and Rhodes pianos… The songs were written in cooperation with singers of various backgrounds who nevertheless create an homogeneous and credible proposal, a classical expression of the Dining Room sound.

The South African Sean Martin gives away soul-jazz suggestions in “No Problem” and funky suggestions in “Driving”. Amraah 8 from Cleveland enrich “Diamond & Comforts” and “Within” with their unmistakable style of soul and poetry with con hip hop suggestions that were already appreciated in Deyampert’s album released on Sonar Kollektiv (“Held Him First” was one of the songs that they had written for that album and that Stefano and Cesare fell for). Marta Collica, already employed in “Numero deux”, is back and gives away folk and blues suggestions in “Thin Ice” and “Forever’s Not”, in duet with Hugo Race (while waiting for Sepiatone’s second album and for the new solo album by John Parish (PJ Harvey) that Marta contributed to as singer and keyboard player). Last but not least Don Freeman who, after Tom Wieland’s suggestion, becomes the icing on the cake, storming in when the album was almost finished and enriching it with inspired Rhodes piano solos as well as two magical moments of vocal jazz, “Destination Moon” and “The World She Made”.

Don, singer, piano player and composer, played during his career with Bill Withers, Michael Jackson, Hugh Masakela, Sergio Mendes, Astrud Gilberto, Sisters Sledge, Chic, Coldcut, Trüby Trio and Osunlade among the others. His contribution to the album, together with the ones from the other musicians (mainly the drummer Leziero Rescigno and the double bass player Marcello Testa), becomes fundamental for the ultimate qualitative leap of the songs. Jazz, funk and songwriting… experiments in ambient soul.

LP:
A1 No Problem
A2 Diamonds & Comforts
A3 Driving
A4 Destination Moon
B1 Within
B2 Forever's Not
B3 Experiments In Ambient Soul
B4 Thin Ice
B5 The World She Made