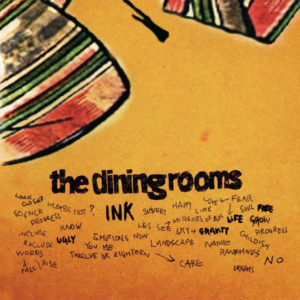 “Ink” is the fifth studio album by The Dining Rooms (eighth if considering the remixed ones). This album goes a little bit back to the origin of TDR feeling: cinematically funky and with great ballads….. It contains 5 instrumentals and 6 vocal tracks. The instrumentals flows through different rhythms to take the listeners to a world of melodious and dark deepness.

“Ceremony” and “On the beach” (dedicated to the Picasso painting) mix at best the funk (mid and slow) and the blues attitude while “Fatale”, “Appuntamento a Trieste” and “Etage noir 2” go really deep in modern jazz. Regarding the vocals, for the first time they go not only with English language in the songs having one track from Brazilian singer Toco and another one by French actor Renaud Chaurè. Toco’s touch in “Cobra Coral” is really contemporary Brazilian noir-wave while Renaud gives us a monster interpretation in “Etage Noir”, written by TDR and Luca Lezziero, paying homage to maestros Serge Gainsbourg and Katonoma. Going back to English language, Sean Martin, from South Africa, is going deep in blues and soul in “Thank U ?”; for sure a new jewel in his TDR career, with echoes of Marvin Gaye in the chorus. A strong piece with politically conscious lyrics.

The Dining Rooms usually have new singers for each new album and in this case we have Afro-German Dodo N’kishi and North American queen Georgeanne Kalweit. Dodo, better known being the singer and drummer of Mouse on Mars (and member of other interesting combos as NatiMatti and Pet), sings the opening track of the album “Freedom” interpreting at best the instrumentals given to him, to create a meeting point between Nick Drake and Stevie Wonder. The lady of the island Georgeanne then, co-wrote “Hear us Now” and “Ink”, two emotional gems to be intended as a sort of birth of nu folk.

As some already know The Dining Rooms touch is a mixture between electronics, samples and live instruments: Leziero Rescigno on drums, Marcello Testa on bass and double bass and Patrick Benifei, Marco Rigamonti and Don Freeman on rhodes. The album cover is inspired by Jean Michel Basquiat, whose art is really close to the philosophy of writing and, therefore, of “ink”. So “Ink” becomes a sort of manifesto of things to say, as well as of the energy to try to say things. Parts of the songs in the album have then been used as soundtrack of the short movie “Ceremony” directed by Maria Arena and inspired by “La Voix Humane” of Jean Cocteau. And Maria Arena produced two footage videos of “Thank you?” and “Hear us now” that will be added to the CD version of the album.