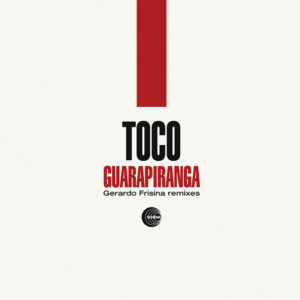 “Guarapiranga” is the name of a neighbourhood in São Paolo, Brazil, particularly dear to the singer Toco. So much so to inspire him this piece, recorded in Rio De Janeiro under the supervision of S-Tone Inc., who produced the track in fact. The original version found in Toco’s forthcoming album “Outro Lugar”, gets a special treatment by the remixing skills of Schema’s original ‘rumbero’ Gerardo Frisina.

Side A features the dub mix, which is the stronger club version at 120 bpm. Various percussive patterns, as well as the chorus, slide the tune over to the dub front, making it an hypnotic dance-floor jazz.

Side B offers another remix, clearly very Brazilian rhythmically. It maintains a solid jazz structure. On this side of the 12” lays also the original version of the song. A contemporary jazzy-bossa tune that is a quite pleasant listen. This EP is for the movers and the shakers, but even for those who like current interpretations of classic Brazilian sounds.