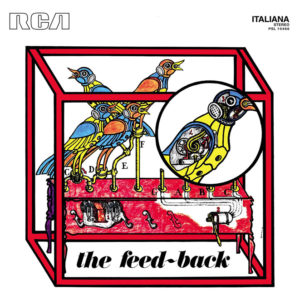 
Among the manifold musical innovations occured in recent years, one of the trends both in Europe and in USA is to set up ensemble devoted to improvisation.
These bands show similarities in their rich expressions, but could nonetheless be pigeonholed in two great families: one directly coming from the Jazz tradition and one of a more intellectual kind, connected with contemporary Classical music.

These trends had been deeply analysed by «The Feed-Back» whose bold approach to music, more linked with current tendencies, placed them at the forefront of the Beat scene.

The name of the ensemble, «The Feed-Back», is noteworthy: a word coming from the cutting edge science of cybernetics communicates to the public the idea of a contemporary reality, almost physical in its essence.

A feed-back is a device that enables an effect to counteract on its causes, achieving this way a given goal, as our body does when it regulates automatically our actions according to their ends.
This mechanism underlies the improvisation – a special circuit whose action adjusts and fine-tunes the energy of each single musician in relation to the others.

The mechanism of feed-back transcends the inner dynamics of improvisation and aims to extend its action to the listeners, enabling another feed-back circuit, now between the band and the public.

This purpose is sought through unusual and disrupting stimulations such as the loss of traditional melodic lines, the introduction of noise in the musical discourse and a deconstructive approach which reduces vocals to the essence leaving only a few basic rhythmic elements as a blueprint that still characterises this music as Beat. Within this avantgarde context the band feels at ease thanks to its innovating spirit and is projected in a fertile future.

For now they invite us to listen to evocative titles like “The Feed-Back”, “Kumâlo” and “Quasars” – aptly chosen for a public ready to discover them, a public capable to understand how this band overcame current musical structures like Psychedelic music or Underground’s timorous attempts with a sound closer to our times that we could name «Upperground».

LP:
A1 The feedback
A2 Quasar
B1 Kumâlo