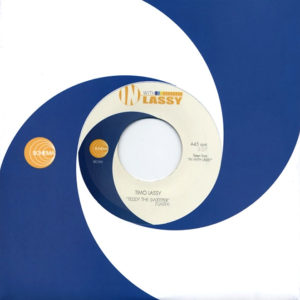 The first release of a new 7” series by Schema Records.

The Timo Lassy Band performing here is top-notch all the way. The wurlitzer duties are carried out by Georgios Kontrafouris, Greece’s gift to the Helsinki scene, who turns the instrument into one of a vital organ in the operation. On double bass, the most sought-after Finnish bassist at the moment, Antti Lötjönen, keeps things solid, and the crunchy beat so central to Lassy’s rhythmically remarkable jazz vision is safe with Teppo “Teddy Rok” Mäkynen on drums and Abdissa “Mamba” Assefa on percussion. Assefa was also part of the production team of the album, recording it at the quintet’s Helsinki rehearsal pad and producing the end results together with Mäkynen and Lassy.

A1 Teddy the Sweeper
B1 Where's the Man?