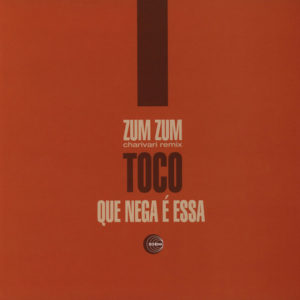 When summer is knocking on your door what music goes better than Brazilian grooves? “Zum Zum”, the second single taken from Toco’s latest album “Outro Lugar” is purely made of that.

Side A starts with the remix of Toco’s cover version of the original track by Edu Lobu, courtesy of French producer Charivari. He delivered a fresh, summery tune that sounds perfect for a lounge cocktail party on a terrace in front of the sea. The vocal riff (sang by Toco with Rosalia De Souza on backing vocals) gets drifted away with the light ambience given by the synth chords, whereas the Brazilian beat sustain the tune rhythmically. The original version of the song comes next on the recording, sounding more classic. Partly for the actual structure of the song itself but also because of the legendary Bossa maestro Roberto Menescal performance on acoustic guitar.

Side B presents a tune of a completely different vibe, especially done to shake up the dances. “Que Nega É Essa” is an exclusive, unreleased Brazilian funky jam, with a thumping disco bass line. A combination designed to make everyone move, including the stiffest. Vocals by Toco with Adi Souza as backing; the production is provided by S-Tone Inc., already responsible for it in “Outro Lugar”.

A1:
Remix and additional production by Charivari
Produced by Antoine Bertola & Arthur Borgnis