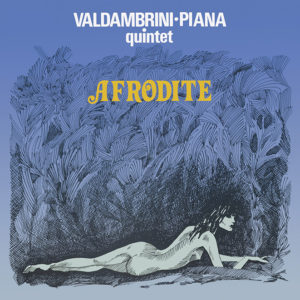 Telling Oscar Valdambrini and Dino Piana’s story could be pointless for those who have been dealing with Jazz for years here in Italy. They are two of the most esteemed “senators” in our Jazz scene; two musicians who could cut a fine figure anywhere. The older is Valdambrini (turinese, born 1924), who was first noticed as a valued trumpeter in the early fifties. In 1955 he created an Italian sextet; from 1956 onwards he was involved in various quintets with Gianni Basso, as well as, giving an important contribution to Armando Trovajoli’s big band in 1957-’58; he was also involved with the most famous jazz names (Chet Baker, Gerry Mulligan, Lars Gullin, Zoot Sims, Friedrich Gulda, Conte Candoli, Lionel Hampton, Duke Ellington, Maynard Ferguson, Buddy Collette, Kenny Clark, ecc.) and he participated in countless festival and concerts. His amazing career is the envy of those who have great knowledge in this field.

Dino Piana is to be considered another undisputed champion. He suddenly appeared on the jazz scene when he imposed himself as a solo trumpeter during the first “Jazz Club”, a conjucture for orchestras organized by RAI in 1960.

As a result of this, immediately afterwards he was coaxed to work with our best musicians. Born in 1930 in Refrancore, in the neighbourhood of Asti (Piemonte), he took part in several concerts and festivals and he got himself known performing in prestigious international events. Moreover he belonged to two big orchestras consisting of some of the best European musicians: in Stockholm in 1968 and in Oslo in 1974. Then he played with illustrious personalities like Baker, Candoli, Mulligan, Ferguson, Frank Rosolino, Charlie Mingus, Gato Barbieri, Slide Hampton and so on.

Valdambrini and Piana, both living in Rome for years, had already been playing for a long time, when they founded, in collaboration with Basso, an unequalled trio of flautes. Once again in 1974 they decided to combine forces to generate a Jazz Quintet that could represent a challenge to any Italian group. The five pieces recorded in this album show several different features, which obviously have an effect on the style of improvisation.

“Arabian Mood” is composed of an oriental scale and alternates between a 3/4 and 4/4 beat. In “Palpitazione”, the rhythmic section performs a constant movement, while the theme is metrically whimsical, almost distorted. Afrodite is a slow and interesting piece, almost a dialogue between the trumpet and the trombone. Drums Atmosphere takes place in an environment which Valdambrini defines as “dreary”, created by long pedal depressions performed by the piano and the double bass. I Due Modi is so called because the first part of the theme is based on an africanized beat, while the central one is swing, in a 4/4 double beat. Parkeriana, lastly, claims to be a tribute to the biggest master of all modern jazzmen and is composed of different beats in the vein of bop. Sante Palumbo, Giorgio Azzolini e Tullio De Piscopo constitute the luxurious rhythmic section required by Valdambrini and Piana for this record, the first jazz production recorded by them in many years.

LP:
A1 Arabian Mood
A2 Drums Atmosphere
A3 Parkeriana
B1 I Due Modi
B2 Palpitazione
B3 Afrodite