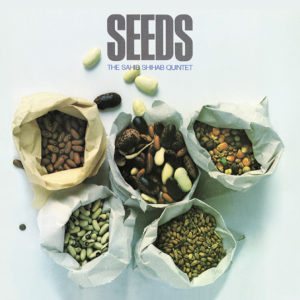 Some friends think that Shihab the man owes the balance of his soul to his beautiful Danish wife. They may be right; for Eros is the very essence of what Shihab plays. Yet Eros is a god with many a face. A tale of tender mournings Shihab’s flute is telling in MAUVE – a piece that translates its title into delicately changing colors of sound. In UMA FITA DE TRES CORES he has his instrument wooing with the proud self-reliance of Latin grandezza. Calmly, softly, almost blandishly Shihab blows the solo flute in the Jimmy Woode composition MY KINDA WORLD. Serene and somewhat playful his own title ANOTHER SAMBA comes along – a most uncommon composition by the way: lasting for sixty bars as if growing independent out of itself, with solos that appear to be additional spinnings rather than improvised choruses; and yet; a perfect, self sustaining melody no element of which is superfluous.

In the last of the pieces for flute, in Klook Clarke’s THE WILD MAN, which is based on a flourish of trumpets, Shihab for the first time reminds of the sombre, the demon-like face of God Eros. He contrasts flawlessly intoned passages with challenging phrases, phrases raucously sung into the flute – really, he is a “wild man” who is playing like that.

This raucous challenging sound prevails throughout the four baritone-titles (“Shihab never withholds long to caress”, Campi says). Shihab blows the instrument the same way he speaks: without any delay, directly coming to the point. And he treats it like a voice, not aiming at an artificially homogeneous sound in all the registers, but at their different modes of expression. In the high pitches the horn gains a brilliant tenor-like quality – for instance in PETER’S WALTZ, dedicated to Shihab’s son Peter, and in Kenny Clarke’s simple drum fills comprising theme JAY-JAY. In the deep register Shihab produces snotty sounds filling lady’s ears with horrors like Pan – thus in JAY-JAY and in the boppy blues SET UP . Shihab’s sense of a scurrilous humor breaks through in SEEDS (which reminds of the West-African heritage of jazz with its multiple rhythms and its renunciation of harmonious development – only the eight bars of the bridge base on a progression of chords): not only does he omit the notorious bombastic chord by the ensemble after his own final cadenza, he even ends with a minor second above the keynote. Seems as if Shihab now unrestrictedly conveys to his music all the experiences and emotions he formerly did not deal with in a musical way. Shihab the man need not be disturbed so that Shihab the musician may improvise passionate choruses.

It would be unjust, however, to forget the choruses of the four other musicians for those by the “born leader”. Francy Boland, taciturn and always introverted: he plays an extrovert, a masculine piano. Even with spare single note lines he produces a piercing and ringing sound that hitherto nobody except him has discovered, a bluesy sound bespeaking the very element of frustration that lies within the title of the trio number WHO’LL BUY MY DREAM. The unfailing feeling for rhythm the musicians of the CBBB praise with the arranger Boland, becomes manifest in the piano solo on SET UP.

Francy’s improvisation is rhythmically styled in a Monk-like manner, and yet no accent could be set differently. Maybe this is the secret of the Shihab-Combo. “Rhythm is our business”, this credo of Jimmy Lunceford could be the one of the five musicians as well. Sadi hits his vibes as dryly as if wanting to bring its ancestors to memory, the wooden chimes of West Africa’s coastal tribes. To reach the fullest poignancy possible, he intentionally calms down even the resonance in MY KINDA WORLD. In UMA FITA DE TRES CORES Jimmy Woode bears out the crispy jazz beat against Sadi’s Bongos and Klook’s Latin-American percussion all by himself.

Moreover – and that, too, is connected with the school of the Duke who was the first in the history of jazz to discover the instrument’s potential as a melody instrument – Woode rips a marvelous counterpoint to the inventions of the other melody instruments, take for example PETER’S WALTZ. And then there is Kenny Clarke. Klook. On the entire record he only uses his brushes. Means by which different drummers only know to bring forward impressionistically blending noises: He drums a vigorous beat with them, fanciful fills, a solo, melodious and at once skillfully playing with cross rhythms in JAY-JAY. The “born leader”, the “outstanding baritone saxophonist of modern jazz” (Joachim-Ernst Berendt), he could not wish himself different sidemen for this record overdue since some years.