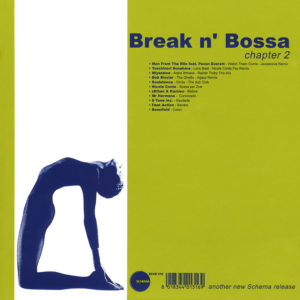 
On the wave of success given by the first chapter of “Break n’ Bossa”, Schema releases “Chapter 2”. The concept remains the same: a journey through broken-beat, nu-jazz and bossa releasing previously unreleased material in CD format.

Great contributions have been made by Yoshinori Sunahara with the track “Love Beat”; a wonderful electro lounge-bossa remix by Nicola Conte; courtesy of “Bungalow” of Berlin, it features the remix by Jazzanova of “Man from The Nile” and one of the most fascinating tracks written in 1999 by “Beanfield”, entitled “Corso”.