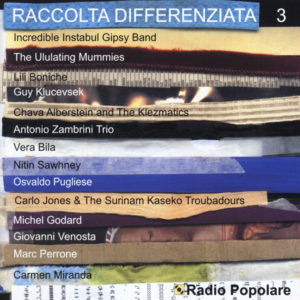 
“Raccolta Differenziata 3” is the new episode from the successful series produced by Radio Popolare-Popolare Network. It is a series of albums where the tracks that are utilised by the Milanese broadcasting station as separation breaks between the programs get periodically put together. These musical pauses that were originally only technical tricks used to give a little breather between one transmission and another, have actually often become small marks of recognition of the Radio Popolare sound landscape; they are sorts of anti-jingles familiar to the listener’s ears.

The listeners’ traditional fondness for many of these tracks has pushed us once again to put them together on cd. There is no recognisable logic for these tracks, if not that of being open to music of all types, places, times, with a little desire to upset the current cliché on what is radio-phonic and listenable and on what is not.

There is a recognition of a passion for being singable and for all the types of exchanges and ‘cross-breedings’: Turkish flutes are upturned like socks, fusion melodies (Incredible Istanbul Gipsy Band), contemporary composers up against pop or popular material (Klucevsek and Venosta), popular songs that are gypsy (Vera Bila), Indian-Spanish (Sawhney) or in invented languages (Ululating Mummies), Algerian, French, and Yiddish waltzes (Boniche, Perrone, Alberstein+Kezmatics), Franco-Pugliese dances (Godard) and Surinamese dances (Carlo Jones).

There is also some attention towards a few serious and secluded Italian routes (Zambrini and the new Venosta), and there are two heroes from the tango and samba songs from the 1930-40s: Carmen Miranda and Osvaldo Pugliese. The album closes with the ‘semi-ghost track’ “Cajuina” – a ramshackled revision of a track from Caetano Veloso performed by the orchestra of a Brazilian psychiatric hospital; an improbable micro-hit for the Radio Popolare listeners.