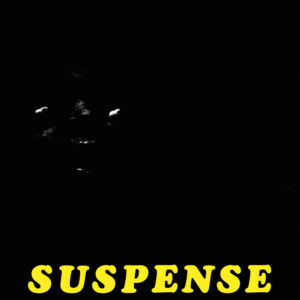 
Among all the aliases used by the great Piero Umiliani, M. Zalla is perhaps his richest and surprisingly multifarious: mainly used to produce experimental records that had little commercial appeal, this ‘nom de plume’ (along with Moggi) is tied to memorable episodes of his career, releases such as “Problemi d’oggi” (literally “Today’s Problems”), “Mondo inquieto” (i.e. “An Unsettling World”), and also “Suspense”, now reissued by Schema Records.

And if titles such as those mentioned above may somehow disguise the musical content (electronic music, by the way), “Suspense” perfectly anticipates what you will hear in its seventeen songs. A full-black front cover, the title written with yellow coloured typeface (it couldn’t be any different) for an album that promises tension, gloomy atmospheres, mystery and, needless to say, suspense elements that convey anxiety and distress. Thanks to the clever use of Moog and keyboards, combined with magnificent orchestral arrangements, the tracks rapidly flow one after another in a crescendo that leaves you breathless, to cite the title of one of the best tracks.

And, speaking about the titles of the tracks, what better way to introduce this reissue to the public other than quoting “Suspense notturna”, “Paura sul fondo”, “Killer”, “Inquieto”, “Suspense angosciosa”, “Evasione notturna” and my favourite one, “Suspense atomica”. A treat for your ears, and another fundamental piece to reconstruct the story of a Master of Italian music. Lean back in your chair and turn off the light…

LP:
A1 Paura sul fondo
A2 Insonnia
A3 Fascia di tensione
A4 Flauto in suspense
A5 Col fiato sospeso
A6 Ambiguo
A7 Suspense notturna
A8 Dietro le sbarre
A9 Rimorsi
B1 Inchiesta
B2 Killer
B3 Monotony
B4 Suspense angosciosa
B5 Inquieto
B6 Giallo
B7 Suspense atomica
B8 Evasione notturna