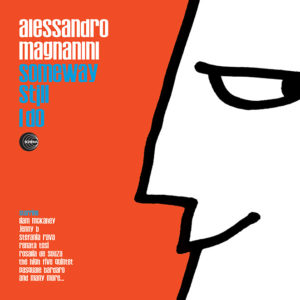 “First love is something you will never forget. I was a child when I had my first encounter with music. Everything around me was black, pitch-black… But at the end of this dark tunnel I could see the light!
No, I was not in a coma, I was at the movies! An old neighbourhood theatre, where first-runs have not been shown for years. But suddenly the screen turned pink, and an unexpected sound made me feel butterflies in my stomach… It was a piano chord, and it sounded very difficult to the ears of a five years old boy: it was the opening chord to the theme of The Pink Panther”.

The main sources of inspiration here are the great adult pop productions of the past, where prominently easy listening melodies were filtered through a jazz approach and a more cultured language alike. Melodies and arrangements by excellent artists such as Claus Ogerman, referring in particularly to those produced for the performances of Astrud Gilberto, the orchestral atmospheres of Shirley Bassey’s repertoire, and the playful and evocative talent of Henry Mancini – influences that could probably be considered unreachable, but they anyway showed the path to Alessandro Magnanini.

“Someway Still I Do” is a record enriched by the immediacy of pop, the quality of the arrangements, timeless music that echoes the glory of unforgettable soundtracks and the finest orchestral jazz.
A number of collaborations enhanced the structure of the tunes. Jenny B’s vocal contribution stands out in “Secret Lover” and “Open Up Your Eyes”, recalling the typical atmospheres of the music by John Williams or the more recent works by Duffy or Amy Winehouse. The singer’s sensual take on “So Long Goodbye” has the typical delicacy of the bossa nova.
But the international guest star is Liam McKahey, frontman of the English band Cousteau, featuring in three songs: the ballad “Livin My Life”, which brings us back to the traditional jazz splendours of the New Orleans of the ‘30s; “But Not For You”, with its delightful bossa jazz; and finally on the daydreaming “Someway Still I Do”. “L’estate è Qua” presents us a new and rare Rosalia De Souza, with the Brazilian singer offering a Italian interpretation filled with the typical romanticism of her country; “Something Fine”, is charmingly performed by Stefania Rava who worked for years with renowned Italian musicians such as Giorgio Gaslini, Paolo Tomelleri and Giovanni Tommaso; “Stay Into My Life” is sung with great verve by Renata Tosi, already by the side of Nicola Stilo, Dusko Gojkovick and Tony Scott, and it is characterized for its uptempo structure suitable for the dancefloor.

Exclusively for this special commemorative release, Magnanini’s unfaltering love for music has brought us two brand new songs, “Cried For You” featuring once again Liam McKahey at the mic, and “Morning Light”, accompanied by the smooth vocals of Elisa Aramonte, a new talent joining Magnanini’s project “Someway Still I Do”.

LP:
A1 Open up your Eyes
A2 Livin’ my Life
A3 So Long, Goodbye
A4 Secret Lover
B1 Greetings from Here
B2 But not for You
B3 Someway still I Do
B4 Stay into my Life
C1 L’Estate è qua
C2 Suddenly...
C3 Something Fine
C4 Blind Date Blues