Cabaret Noir are Pasquale Bardaro (music & vibes) and Barbara De Dominicis (lyrics & voice). Their music could be described like an evocative sequence of sonorous landscapes: almost an imaginary soundtrack that has his roots into jazz. An ethereal, visionary and oniric POP.The songs of cabaret noir alternate different moods, blending cinematic soundscapes with the lastest trends in chill-out and down tempo music A balanced tapestry where synthetic samples cohabit with the violins or the irony of a bass tuba. The tales of cabaret noir are populated of paradoxical visions: a collection of melancholy, moody reflections that may have their ideology in a noir film… mellow and sensuous stories at times but surrealistc and ironic at the same time.

Regular percussionist at the S.Carlo Opera Theatre in Naples since 1998, Pasquale Bardaro is chosen as the only Italian vibraphonist in order to join the European Jazz Youth Orchestra with which in July 2000, he goes on international tour in several European towns. He has played with Barga Jazz Orchestra and, in Naples, with Conservatorium S.Pietro a Majella Jazz Orchestra conducted by Bruno Tommaso giving concerts in the many Festivals throughout Italy. In 1996 he takes part as vibraphonist with the group Agcà in the television programm “Cercando cercando” on Rai 2. In 1997 the Modern Quartet is founded and starts an intensive concert activity: Fez Festival (Bari), Rieti, Milan, Brescia Jazz Festivals, and in the most important Italian clubs in Bari, Naples, Milan, Perugia and Rome. Since 2000 he is part of the band “Urban Society” whose founder is Gaetano Partipilo. In 2002 with Nicola Conte he takes part as vibraphonist jazz at 23° Festival International “Le Mouv’ en Trans” di Rennes (France). In 2003, he takes part as vibraphonist with the Koop, in the Italian-english tour. In 2002 he meets Barbara De Dominicis with whom he founds the duo CABARET NOIR. Moreover he worked together with several musicians of international renown: Maria Pia De Vito, Pietro Tonolo, Maurizio Giammarco, Giovanni Tommaso, Steve Grosman, Daniele Sepe, Nicola Stilo, Paolo Fresu, Bruno Tommaso, Attilio Zanchi, Fabrizio Bosso, Gianluca Petrella, Pietro Condorelli, Gaetano Partipilo, Franco Ambrosetti, Billy Cobham, Jesse Davis, Mike Melillo, Nicola Conte, Koop, Nasheet Waits, Az’shi Osada, Greg Osby.

Lyricist and performer of “sound poetry projects”: a series of experiments based on the couple orality/vocality, that tend towards a theatrical concept.
“Extravagance in Cesare Pavese” performance for piano and voice based on Cesare Pavese poem
“Verra’ la morte e avra’ i tuoi occhi” CORPO ESPOSTO an extemporary music & voice performance based on Barbara’s unpublished poem “Il corpo esposto” (with Mirko Signorile on piano and Vincenzo Bardaro on drums)

Since 2002 she is working on the idea of a project called “Le Cinema est le Cinema”. An ideal journey in the word of celluloid through the filter of music. The project proposes a choice of 14 famous songs that belong to some of the movies that wrote the history of cinema. Le Cinema est le Cinema is a way in the feminine, from the thirties to the end of the sixties, this voyage means to travel among the divas of the Cinema all over the world. From Marlene Dietrich to Carmen Miranda,from Rita Hayworth to Audrey Hepburn,from Catherine Deneuve to Sophia Loren and so on. But this is not only a musical project. Images here are as much important as music. Because in this case music nourishes images; and images nourish music. A video done with a collage of all the movies that the songs belong to,is what the research suggests. A surrealist montage of all the photograms where the divas are singing. In 2002 she met Pasquale Bardaro with whom she founded the duo CABARET NOIR. 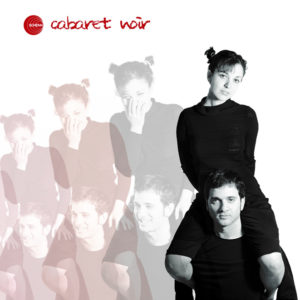