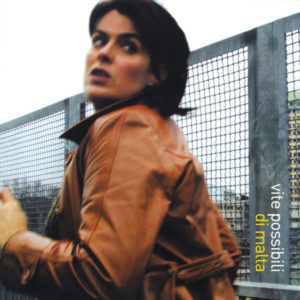 The title of the second album by Patrizia Di Malta for Milano 2000, “Vite Possibili” (Possible Lives) hides the key to the albums listening and each track develops this theme from a different point of view. The title-track points a finger at how sometimes any detail or an involuntary decision, might have influence on an entire existence, changing its course in a decisive manner.

Some of these aspects are autobiographical, like in the case of “Effetto Speciale”, signifying an artistic change of the artist. “Sono come te”, a duet with Madreblu’s Raffaella Destefano, is also autobiographical and its concern are anxieties between mother and child. Through out the album Di Malta becomes different characters giving a different approach to her musical interpretation. In “Un colore” there is a feeling of a body with a misplaced soul and “Ricominciare” starts from the effort of regaining the chance of finding a life thought already gone. “Alpha chiama Omega” is to manifest the search of the twin soul, pushing over the limit to find an answer which in “Mantra” is put asleep in the most soothing manner.

Music shapes the sounds that in return shapes the atmosphere of an existentialist project carried out by an essential artist.