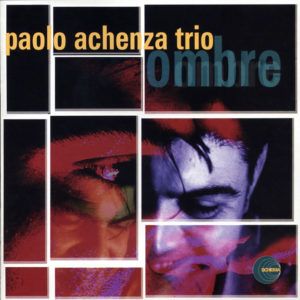 This second album by the Paolo Achenza Trio is the actual first album released by Schema. This debut marked the end of the collaborations carried out with Right Tempo. What follows are the linear notes of the album written by Nicola Conte.

It is the dawn of a rainy day towards the end of autumn. I am just about to drop some lines for Paolo.

Schema 1
“Ombre” (shadows): like characters of a John Casavettes film. Like moving around N.Y. without having any real destination in mind. Music by Charlie Mingus. Shadows inherited by our eldest brothers, those well known and those less popular. Just them with their hopes of a better society. We have put these shadows together: the shadows of the last romantic age. Politics university, dull/empty days. Perhaps, Paolo and I never revealed to each other that those shadows have always been with us.

Schema 2
“Ombre”: more than the 1st album “Do it” shows a direct exaltation of the rhythm, and again more than the previous, “Ombre” it take advantage of the experimentation of the contemporary scene tempos while, at the same time, jazz themes, improvisations and impromptu cliches of our music find a more appropriate space. In order to distinguish the sound of “Ombre” we have put together a new bigger ensemble: more horns, a new drummer joined by Indian and Afro-Cuban percussionists, folk and electric guitars as well as vocals.

Schema 3
This time, the composing effort brings together a collection of exclusive new tracks. The author is Paolo apart for one exception “Semplicissimo” a piece by Lauzi/Tacchini. This track was, originally arranged by Maurizio Lama the young Italian pianist from Turin who died prematurely n the late 60’s. Here, together with keeping the imputs of those days, we have created a more psychedelic interpretation with tablas played by Pippo Roberto on flute joined here by Carla’s voice and her slightly Shirley Bassey’s English cut.

“Ombre” which names the whole collection, is an experimental fusion of jazz an drum & bass. It is played on two main themes. Matt’s solo is based not only on the essential harmony but also on the bas line as it already happened in some free-jazz. The use of the marimba brings to it a kind of ‘obscure’ African atmosphere being joined also by an old Moog sound.

“Samba Royale” is instead the ideal continuation of Fez Boss. Paolo’s original theme is here developed by Derek in a way that probably Sun Ra would have written on an imaginary trip to Rio. Massimiliano and Stefano play bossa holding their breath. Paolo takes one of the most inspired solos, Derek flies most lie Lee.

“Mondo Cane” was originally a jazz-funk theme with a very strong had-driving vibe now transformed in a kind of patchwork which reminds of the early 70’s soundtracks and their folk guitars, wha wha, bongos and vocals, Carla and Sara, delivered in the Piero Umiliani’s fashion.

“Abstract” is a blues kin of Blue Note tune based on a trip hop tempo. Cesare’s intention and tone, same as through the whole record, are mostly rough and improvised.

“Afro impression” is sincerely based on a Masters at Work rhythmical intuition as well as one some Yeseff Lateef kind of impressions. Roberto and Paolo improvise their parts on the particularly intense rhythmical sections created by Gabriele’s Afro-Cuban congas.

“So Long” was initially an instrumental track but, Matt’s yearning delivery of the theme suggested also a possible vocal experimentation. The sustained tempo of this piece is in contrast with both th emoood of the track and the peculiar solo of Lester Young’s shadows. An indian tamboura opens the track.

“Idealogical warfare”, composed by Paolo and Cesare, creates a kind of big abstract band whole voicing vibe while ‘loft’ si base on a hip- hop beat.

“Six and Choice” belong to a repertory which goes back to the “Do it” period. Chris tenor is very powerful, it is definitely a tout court soul-jazz track.