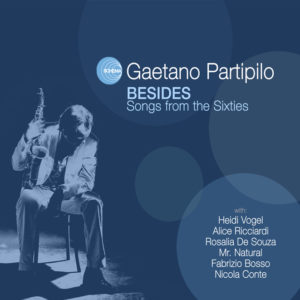 With this new project Gaetano showcases the other side of his artistic personality. It is dedicated to the music of the’60s, rearranged in a modern way. The result is a warm music, refined and full of pathos.

The album opens with “Beyond the days” written by Gaetano and Alice Ricciardi. It’s a song in ¾ based on a dreamy atmosphere.

“Right Now”, a Herbie Mann’s hit made famous by the great Mel Tormè, is sung by Mr. Natural.

“Atras da porta” is hand signed by Chico Buarque and is a poignant bossanova masterfully interpreted by Rosalia De Souza.

The“Jivesamba”, a Nat Adderley’s hit made famous by the Cannonball Adderley Quintet first, and then by JonHendricks, here with Mr.Natural.

“Ocean Dance” features a ravishing solo by Fabrizio Bosso and the track has been sung by one of the most interesting voices in contemporary jazz: Heidi Vogel.

Then another Bossanova entitled “Essa Mulher” made famous by versions of Elis Regina and Joyce.

“Wall and water” is partly adapted from the tune “Blues for Hari” by Tom Scott.

“Autumn Serenade” is a little-known ballad masterfully played by Johnny Hartman and John Coltrane in the historical Impulse album published in 1962. This version is arranged and sung by Mr. Natural.

Co-producer Nicola Conte plays guitar on the next song, one of the most successful songs of Gary McFarland. The title is “13 Deathmarch” and is taken from the soundtrack of the 1966 film “Eye of the Devil”.

“Los Marcianos” is inspired by the curious stories about a band.

The following excerpt is instead an homage to Italian songs. It’s a song that the teacher Bruno Canfora wrote for the voice of Mina, here interpreted by the wonderful voice of Alice Ricciardi in a “New York style” arrangement.

The album ends with another historical track by The Cannonball Adderley Quintet, “The Sticks”, again with Fabrizio Bosso.