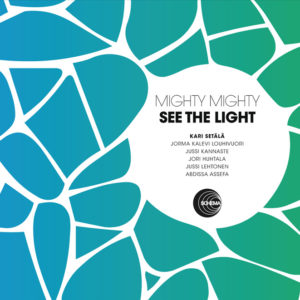 As an artist, while I regard composing as a great way of self-expression, I do strongly believe that a collection of “good tunes” – in addition to immaculate solo performances and communicative band interplay – is the guiding light and backbone of a successful jazz album set. That is, compositions with memorable and strong, melodic themes, that – while being approachable – never compromise their artistic integrity nor forego the jazz tradition they stem from. Compositions that are almost always more than just vehicles for extended improvisation: songs.

I believe this was particularly evident in classic 1960’s quintet hard-bop, soul-jazz and early 1970’s post-bop, electric jazz-funk and Latin fusion – a spicy stew, where this album and its songs draw their inspiration from. Peculiarly, most of those distinct compositions that have become my favorites – “standards” in one way or another – seem to be written by non-pianists, and especially trumpet/horn players: artists such as Freddie Hubbard, Joe Henderson, Woody Shaw, Eddie Henderson, Donald Byrd, Nat Adderley or Lee Morgan. That said, pianist-keyboardists such as Herbie Hancock, Horace Silver or George Duke certainly played their part in moulding who I am not only as a pianist, but as a composer.

Putting together this group in early 2009, I had a quite clear artistic vision of trying to balance the musical output between those two loves: there’s that 1970’s electric-piano-fueled jazz-funk as pioneered by H. Hancock, and on the other hand, the acoustic two-horn hard-bop sound of the 1960’s. I’ve been fortunate to be surrounded by a group of excellent and highly in-demand musicians, who are able to swim in these waters like its their second nature!

The material on this album was written over the course of several years, some of it, like “Simba” and “Dark Sun” reaching as far back as 2007, while some, like “See The Light” are more recent, 2011. While it certainly means that we have been performing this material live for years, it certainly doesn’t detract from the spontaneity of these top-notch performances!

“Backyard Boogie” is J.K.L.’s take on those delightful, melodic hard-bop tunes from the 1960’s, perhaps with a little “touch of Silver”.

“See The Light” is a straightforward F Minor quintet tune with a 1960’s hard-bop feel. Somehow this gospel-like title seemed like an appropriate name for it, perhaps echoing those classic 60’s sessions by artists like Donald Byrd or Lee Morgan. There’s also a vague connection of this being the band’s debut album and hence: seeing the light [of day]…

“Once Again” is a 70’s-inspired bossaesque composition with a challenging harmonic structure, and it features only the piano. It also started its life as something completely different, an R&B song with lyrics!

“Dark Sun” is a modal piece in 3-4 time, inspired by the dark and gloomy Finnish winters, and a few 1960’s/1970’s soundtracks. The band goes to work on this one, gaining an extra boost from the always explosive drumming of Jussi Lehtonen. This is a quintet performance, with Abdissa sitting this one out.

“Simba” was initially inspired by the African sounds and unusual time signature of a Joe Henderson composition called “Gazelle” from the 1970’s, and it features saxophonist Jussi Kannaste as the only soloist. Bassist Jori Huhtala sits this one out, letting me showcase my synth bass chops.

“Seventh Sign” is a wonderful song composed by Florida-based pianist/composer Ron Miller in 1969, that I discovered through our friendship. While the original was a fast Latin piece, my jazzfunk reharm/arrangement pays slight homage to Herbie Hancock’s “Butterfly”. After my piano solo, J.K.L. gets to electrify the rest of the performance with an extended solo.

“Karma” actually also started life as a ballad, but later developed into this danceable samba number.

“Too High” has always been one of my favorite Stevie Wonder songs, and a tune I’ve long wanted to arrange for a jazz group. I wrote a new three-horn jazz reharmonization/arr. just prior to the recording session, that maintains the original’s essence. A big thanks to trombonist extraordinaire Heikki Tuhkanen for helping us out.

“Time’s Up” is medium-up burner that was originally written for a quartet during my time living Miami, Florida. Despite usually being the opener of our live set, it gets the honor of closing the album.

LP:
A1 Backyard Boogie
A2 See The Light
A3 Dark Sun
B1 Simba
B2 Seventh Sign
B3 Time's Up