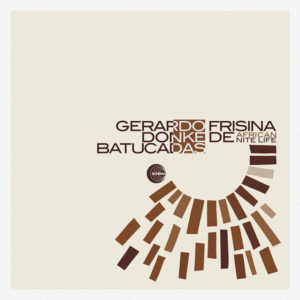 This 12” from Gerardo Frisina presents original brand new material since the previous single “Calle de Candela”. Three tracks of exotic flavour where the music is played by excellent musicians as ever (most of them already featured in the previous single) with a little hint of electronic effects.

“Donke De” has a complex texture, made of Salsa, Latin and Jazz. Crazy percussions played by Angelo Pusceddu lead the way to improvised vocals sung in scat-style almost. The track becomes a hypnotic club “sweater” through the heavy flute. Truly, a monster track on side A. Side B kicks off with “African Nite Life”. Sounding like an urban jungle at night, because Gerardo knows that the African beat of life does not rest at night-time. A rather amazing floor twister which builds up slowly and incessantly. Powerful rhythms make the tune swing between Broken Beat and Deep House. The Clubs will love it. Who could imagine that the closing track of this single would be a Batucada? That’s what the title suggests and the tune proves. Frisina here remixes an old session by a Samba school ensemble from Milan. The piano makes it even more particular, like a mixture between Samba and Jazz.

All tracks written and produced by Gerardo Frisina