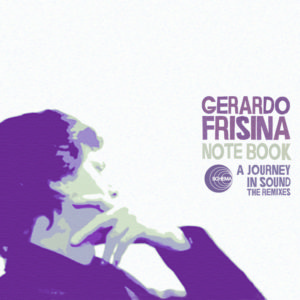 
Gerardo Frisina’s journey into music continues perpetually in search for the right balance between Jazz, Afro-Latin and contemporary beats. The fruit of this exploration takes shape into his 4th album to date, due to be released in September ’07: “Notebook, A Journey In Sound”.

This album is more than just a collection of remixes. Frisina produced a considerable amount of them for various labels from being a sophisticated record collector Gerardo transformed into a meticulous music producer that already released 3 albums and a variety of singles in these early years of the new millennium. Now his name is known internationally as well as being appreciated by worldwide music connoisseurs. This album features the most representative remixes he has produced (‘Guarapiranga’ being here the only one he did for Schema); but also encompasses 3 previously unreleased tracks (#6 ‘Calle De Candela’; #9 ‘Es Diferente’; #12 ‘Tokyo’s Dream-‘07 version-’) as well as B sides of 12” he released, which synthesize the essence of his journey through music.

The recording starts with Dizzy Gillespie’s “Swing Low, Sweet Cadillac”, which came out as a 12” promo on Impulse, as opposed to the CD version. Besides some electronic effects, in this version there is a piano riff improvised by Luigi Bonafede replacing the refrain sang by Dizzy in the original. The second track in the album is Toco’s “Guarapirnaga”. Here Gerardo retouches a song by the young Brazilian artist on Schema records, which came out in his ’07 album “Outro Lugar”. It remains a very Brazilian tune rhythmically, yet with a solid jazz structure. Next in the listening comes the rare “Dis-Ka-Ndombe” by Jorge Graf. The original was from a Uruguayan drummer of the ‘70s who recorded the piece in Italy. Oddly enough, it was much faster than this remix at 130 bpm. Gerardo’s twiddled with this version for the U.K. based Afro-Latin label Soundway, adding a fantastic interpretation given by Gerardo’s trusted sax man Germano Zenga. His improvisation enriches substantially the piece. The 4th track is a rather obscure (except for the very fans) Sun Ra composition “Stardust from Tomorrow”. Gerardo re-worked it with his core musicians to make it an original piece. He named it ‘dissociated mood version’ because, when compared to the original, dissonant parts were added. The rhythm has got swing and the astral atmosphere hanging around draws inspiration from the late period of the ‘cosmic’ Jazz composer who died in ’93. “Black Forest Stomp” is the remix of a track by Hipnosis, which Gerardo produced in 2003 for the German label Perfect Toy. The original rhythm of 6/8 was adjusted to 4/4 to suit the clubs, with Bossa drums.