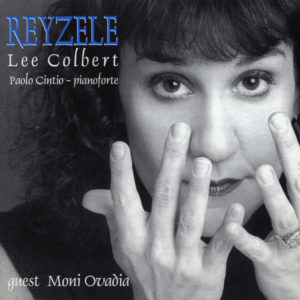 “What a beautiful voice, a wonderful voice!” How many times have you heard this comment during a singer exhibition. This usually happens independently from real potentiality of the performer and of the context. Lately, after one of my show, I heard the musical critic Sandro Avanzo saying, about Lee Colbert, “This woman has got a properly civility in her voice”. Yes, I totally agree with Sandro Avanzo. This is not a “beautiful voice”, this is something more. Leonore Goldberg, today known as Lee Colbert, is just extraordinary, magic.

She is able to represent a musical culture in all its magnificence, catching its secret and unknown shadings. The repertory of the Yiddish author-song has found, in this Jewish Argentinean woman, with Est-European origin and musically educated in the USA, its best and complete expression.

The meeting between the voice of Lee with Mordekkai Gebirtig, one of the most prolific and genial author of Yiddish songs, is a sort of epiphany: it seems that all these songs have been written especially for her, and it’s not hazardous to say that she is absolutely their best interpreter.

I can’t pride myself in saying that I discovered her, because she has done it on herself: she has given to her talent the chance of a technical forming of first choice, giving the priority to the voice, but, in general, touching all the various aspects of the musical culture.

I can just have the merit of showing her to the public with the participation in my “Theaterorchestra” like female co-starring, and the great pleasure-privilege to produce her, giving people the chance to enjoy her voice, with this her first recording.

produced by Moni Ovadia
arrangements by Lee Colbert and Paolo Cintio
except 09 by Wainer / Colbert and 11 by P. Cintio

with the participation of:
Moni Ovadia on 08
Patrick Novara - clarinet on 11
Emilio Vallorani - flute on 09, 11