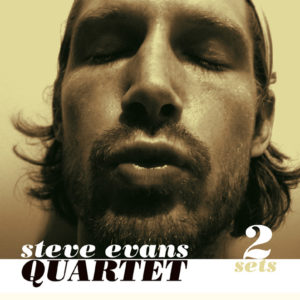 After being invited to study at both the Manhattan School of Music and The Berklee College of Music, he opted for the latter. It turned out to be the right choice as he was offered the opportunity to spend two years along side of celebrated jazz vocalist Kevin Mahogany as his chief instructor. After leaving Berklee Steve Evans placed himself in the middle of Chicago’s thriving jazz scene and has been a mainstay ever since.

Evans stands out in the already narrow field of male jazz vocalists… His choice of material, (Tom Waits, Nick Drake, Arto Lindsay, Van Morrison, Milton Nascimento, Benjamin Britten….) and tenor range along with strikingly original arrangements, create a sound that is entirely unique. Steve Evans originally intended to release a live recording of his quartet, but “technical difficulties” intervened. So instead he imposed strict restrictions on his studio process in the hope of recreating the conditions necessary to have a “live” sound. It worked. Two great sets – all acoustic – all live recorded without an audience. Evans swings hard with a clear tenor and plenty of sass, even on ballads, and he mixes up the standard repertoire by making room for songs by such great songwriters like Nick Drake, Tom Waits and Van Morrison.