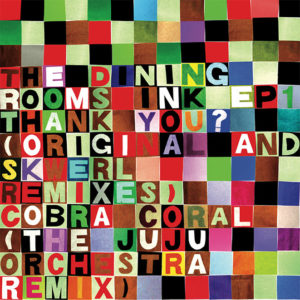 “Ink-Ep 1” is the first in a series of singles containing remixes of tracks found in “Ink”, The Dining Rooms fifth studio album.

“Ink-Ep 1” contains the original version of “Thank You?”, a soul-blues ballad, whose Hip-Hop attitude is built around a sample of strings from the ‘patchanka’ sound by French guys Orange Blossom. “Thank You?” gets remixed by Skwerl; jazzy Michael Beim from Wien is one of hottest man of the moment as proved by his 12″ on Sonar Kollektiv. His remixes here (vocal and instrumental) dig really deep into electronic coolness and Chicago boogie hints. The Juju Orchestra close the single giving to Brazilian noir “Cobra Coral”, sang by Toco, a modern and Dance/Jazz flavour.

The artwork of the cover is inspired by Alighiero Boetti as the cover of Ink was by Jean Michel Basquiat.

A1, A2:
Additional production by and remix by Michael Beim
Mixed at Jazznbass Studios, Vienna, Austria

B2:
Additional production by The Juju Orchestra (Kilic/Schilgen)