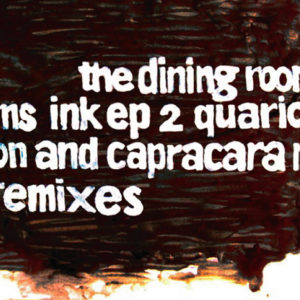 “Ink-Ep 2” is the second single taken from the latest 2007 album of The Dining Rooms and contains 3 new remixes by upcoming names on the underground scene.

CAPRACARA is a producer hailing from the U.K., by now a cult artist for the super-high quality label in the heart of London, Soul Jazz Records. He put his remixing hands on the bluesy cinematic, sang in French “Etage Noir 1” transforming it into a 21st century dub-ridden ballad with a 4/4 attitude.

Quarion instead is a special project from Hip-Hop, Nu Jazz and Techno producer Ianeq. Already a producer for Drumpoet Community (Compost), Quarion double treat (Instrumental and Extended) of the album title “Free To Grow” preserves Jazzy, Dub atmospheres, fused into Techno Ambient in the Instrumental version, whereas in the extended version, the original vocals by Dodo NKishi (Mouse On Mars) are maintained to project the track into a realm of future electro-soul.

Like the previous single, this Ink Ep2 benefits from the support of trendsetting DJs of the future Techno/Jazz scene. The artwork of the cover is inspired by Mario Schifano, just like that of Ink ep1 was by Alighiero Boetti and the one on the album Ink by Jean Michel Basquiat.

A1, B2:
Additional production by and remix by Quarion
Mixed by Shapemod
Instrumental edit by Marco Rigamonti